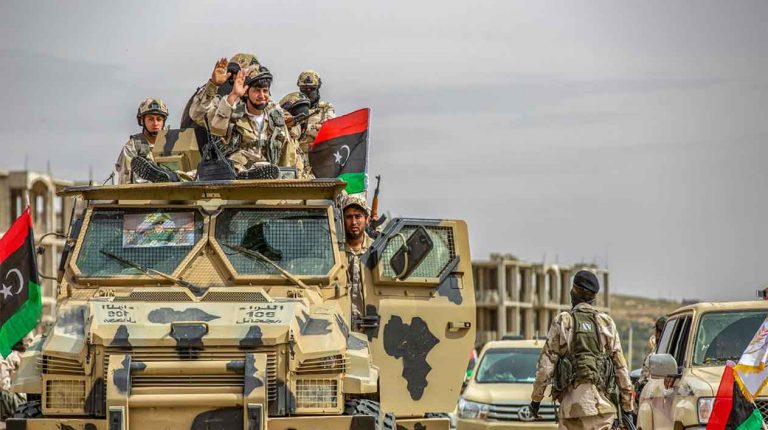 The eastern-based Libyan Arab Armed Forces (LAAF) captured the coastal city of Sirte, according to the LAAF spokesperson.

Ahmed Al-Mesmari said on Monday in a press conference that the key city was “officially liberated from terrorist groups and criminals in a quick operation that followed a solid military plan.”

“The parliament congratulate the Libyan people and our people in Sirte for this glory victory,” Belhiq said, calling on all the residents of Sirte to unify behind the LAAF.

Sirte, the birthplace of late Libyan ruler Muammar Qaddafi, has been under the control of militias allied to the UN-backed Government of National Accord (GNA) since the Islamic State militants were expelled in 2016.

The fall of the city, located east of Tripoli, is considered a major gain for LAAF Commander Khalifa Haftar, who ordered in December 2019 to advance toward the centre of Tripoli as part of the “final battle” to control the capital. Since April 2019, his forces failed to seize the capital from the GNA-allied militias, especially the groups in Misrata.

On Sirte operation, Misrata militias which are allied with the GNA said via Facebook that they withdrew from the city “to prevent bloodshed,” adding that they “LAAF had the support of sleeper cells in the city.”

Tunisia Presidency’s spokesperson said on Tuesday that the government will not allow Turkey to send its troops to Libya across Tunisian borders.

Rachida Nefer said in press statements that Tunisia President  Kais Saied made it clear to his Turkish counterpart regarding sending troops from Turkey to Libya across Tunisian borders. She stressed that Tunisia’s stance has not changed and that it rejects any foreign intervention in Libya.

Last week, Turkey parliament approved a bill that allowed the government to deploy troops to the war-torn country in support of the GNA.

According to the UN, Turkey previously provided the GNA with military equipment, including armoured vehicles and drones, but the deployment of Turkish ground troops is major escalation in the war-torn country. For Haftar, he is backed by the UAE, Egypt, and France.

Libya has remained in chaos, divided between two governments since the fall of Qaddafi in 2011. The oil-rich country suffers from a financial crisis due to clashes between militias and forces loyal to these governments.