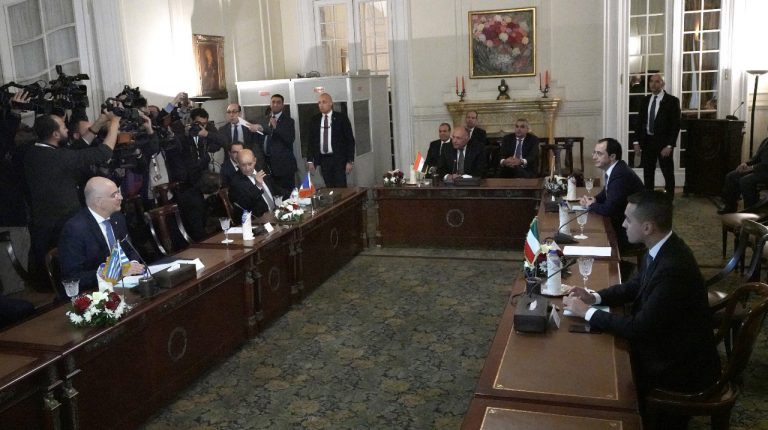 The announcement came during a press conference following the meeting of the ministers of Foreign Affairs of Greece, Egypt, Cyprus, France, and Italy

Egypt’s Foreign Minister Sameh Shoukry said Egypt will continue to support Berlin conference in order to reach a political settlement to the Libyan crisis, adding that the memo of understanding (MoU) between Turkey and Libya breached the UN arms embargo.

The two MoU between Turkey and the Libyan Government of National Accord (GNA) escalated the crisis, explained Shoukry.

France’s Minister of Europe and Foreign Affairs, Jean-Yves Le Drian asserted that the Turkish-Libyan MoU is disturbing and legally invalid.

Furthermore, Le Drian met Egypt’s President Abdel Fattah Al-Sisi and discussed the latest developments in the Libyan conflict on Wednesday. During the meeting the two sides agreed on the necessity of achieving stability in Libya, through political solution. They also asserted the need to support the Libyan army in order to combat terrorism, and armed militias.

Haftar’s visit is the first to a European country amid calls for ceasefire between the LAAF and the Government of National Accord (GNA). It was reported that the head of GNA, Fayez al-Serraj also met Conte on Wednesday evening, an Italian government source said, in order to reach a ceasefire in Libya.

On the other hand, Turkey and Russia urged Libya’s warring parties on Wednesday to declare a ceasefire starting 12 January. During Recep Tayyip Erdogan’s meeting with Vladimir Putin in Ankara, Turkey and Russia issued a joint statement calling for the end of hostilities, normalisation of life in Tripoli, and other cities, as well as supporting UN-sponsored peace talks.

On a different note, Erdogan said that Turkey deployed 35 military personnel to Libya but they would not take part in any fighting.  “The soldiers will not fight. Other soldiers who will be deployed later will also not enter any combat,” Erdogan told his ruling party, according to the Hurriyet daily.

On the ground, the LAAF launched strikes targeting Abu Grein checkpoint, close to al-Washka, in  response to Tuesday clashes on the road between Sirte and Misrata, where LAAF sources said nine of their men were killed in an evening drone strike.

On Tuesday, Ministers of Foreign Affairs of France, Germany, Italy, and the United Kingdom demanded in a joint statement the Libyan warring parties to sincerely embrace the UN-led efforts towards a political settlement, the European Union stated late on Tuesday.

Referring to the two MoU, the EU stressed the need to avoid unilateral actions such as the signing of agreements, which further exacerbate the conflict or actions which create a pretext for external interference.

Meanwhile, the Tunisian Shems radio station quoted the spokesperson of Tunisia’s Ministry of the Interior, Khaled Al-Howainy as saying that the ministry had seized weapons shipment in Medenine Governorate, southern Tunisia, which came from Turkey, and was on its way to Libya.

Tunisia’s President Kais Saied on Tuesday, discussed an urgent emergency plan to address the possibilities of large numbers of refugees’ flowing from Libya.

He pointed out that in 2011 Tunisia also witnessed large waves of refugees fleeing the war in Libya, asserting the need to take all security and precautionary measures to prevent any possibility of  terrorists infiltrating into Tunisia.