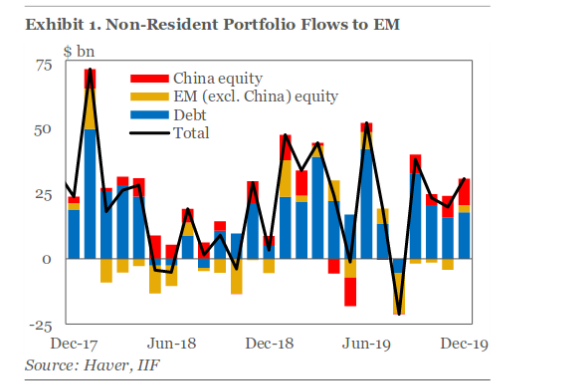 The IIF estimated that EM securities attracted $30.7bn in December, significantly higher than the $19.9bn in November 2019.

“Flows to emerging markets continued their recovery from the most recent slump in August, as monetary easing by major central banks and a US-China phase one trade deal provided support,” the IIF explained.

In terms of the debt flows, the report said that the report flows continued their robust performance, reaching $17.8bn in December and $54.3bn in the fourth quarter (Q4) of 2019.

Equity flows continued their recovery, as such flows to China grew to $10.1bn and flows to EM including china swung by more than $7bn to positive $2.8bn.

The IIF attributed the increase in debt flows to the positive dynamics in Latin America (LatAm), recording $8.8bn compared to $3.1bn in November.

“While EM Europe stagnated and AFME as well as EM Asia experienced declines, the latter significantly so ($4.3bn compared to $7.8bn in November),” the report mentioned.

On the other hand, the IIF said that the positive swing in equity flows was due to a large increase of such flows to EM Asia ($13.6bn compared to $7.3bn in November), mentioning that Positive contributions also came from smaller outflows in LatAm and AFME.

“We estimate our broader measure of capital flows to EM (including banking and FDI flows) was $0.7bn in November, a large swing from October, which saw net outflows of $49.6 bn,” according to the IIF.

The report mentioned that this was largely a result of positive developments in Argentina and Saudi Arabia.