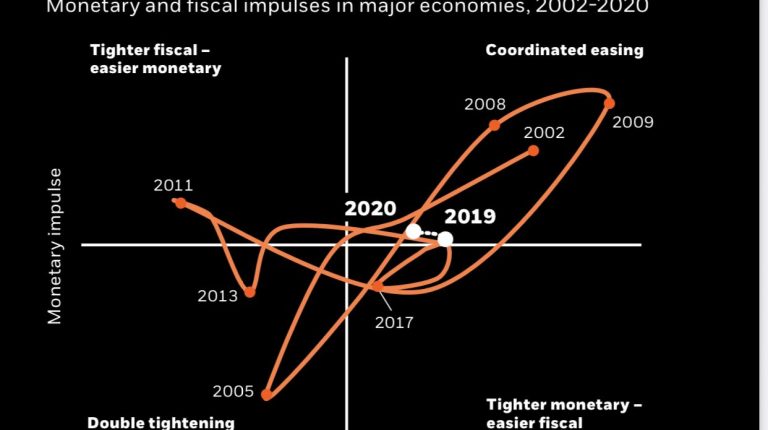 BlackRock Investment Institute said in its 2020 global outlook that the 2020 macro environment marks a big shift from the dynamics of 2019, when an unusual and late-cycle dovish turn by central banks helped offset the negative effect of rising trade tensions. The dovish US pivot looks to be over for now, but any meaningful support in the euro zone will have to come from fiscal policy, which Blackrock does not see in 2020. However, emerging markets (EM) still have room to provide monetary stimulus.

BlackRock analysts predict an inflection in global economic growth over the first half of 2020, the unusual late-cycle, and dovish pivot by central banks has led to a dramatic easing in financial condition. The impact of such easing on the real economic typically comes with a lag, but has been particularly delayed this time due to a global protectionist push.

They see a shallow growth pickup pushing the economy back to the late cycle norm of trend like expansion. Yet, easy financial conditions are unlikely to fully translate into stronger growth, partly because of the offsetting force of protectionism.

Moreover, they believe the incentive for the US and China to hit pause on their trade conflict are strong in 2020, although there could be turbulence along the way. Trade pressures moving sideways should allow global trade activity for some breathing room. They see China’s economy stabilising, but with little appetite among its leadership for the large-scale stimulus that has buoyed the global economy in the past. In addition, Europe and EM economies should see a higher average growth as they recover from a weak 2019.

Concerning policy rates, they see economic fundamentals driving markets in 2020, and less scope for monetary easing and other policy surprises. The bar for further easing by the Federal Reserve looks to be high with no policy action barring a significant growth slowdown or an unwanted tightening in financial condition. Elsewhere, the European Central Bank (ECB) and the Bank of Japan (BOJ) may deliver further monetary easing given persistent inflation undershoots. Both central banks have limited policy space left, however, and the side effects of negative rates particularly on banks’ profitability and ability to lend increasingly undermines their policy efforts.

In context, monetary policy looks set to stay easy across the US, euro zone, and Japan with rates below equilibrium levels. The lagged effect of policy easing should start to filter through to economic activity. Easy monetary policy, low rates, and low bond yields offer a favorable backdrop for income generating assets, in their view. They also see a room for many EMs’ central banks to ease, supporting EM growth. This underpins their overweight in Emerging Markets debt, particularly local-currency debt, and in high yield.

On the other side, developed market policy rates look to be broadly on hold for now. With growth and inflation to inflect higher, this creates some risk of a steepening yield curve. Short maturities and TIPS are likely to provide more resilience under this base case.