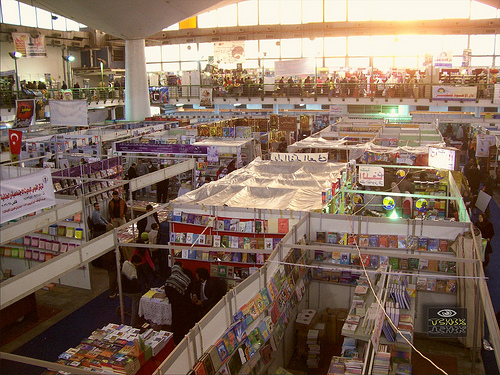 Only less than two weeks come between us and one of Egypt’s biggest cultural events of the year, the 51st Cairo International Book Fair (CIBF). The bookworms’ platform graces us for the second year in a row at Egypt International Exhibition Centre, located in the Fifth Settlement, with another increase in the ticket price, reaching EGP 5.

The Middle East and North Africa (MENA)’s biggest book fair kicks off on 22 January, and for two weeks it gives millions of visitors the chance to purchase books from more than 900 publishing houses, and to attend hundreds of cultural activities.

This year’s edition comes under the theme “Egypt, Africa: the Diversity Culture”. Senegal comes as the 51st edition’s Guest of Honour, and Gamal Hamdan is the fair’s main figure.

Minister of Culture Inas Abdel Dayem said the fair’s last edition witnessed remarkable success, “with expectations that this round will even beat the previous one, as we started working on it right after the conclusion of the golden jubilee of Cairo International Book Fair.”

“Through this platform, I invite every family to come join our attempts in creating lightened generations that face the extremist and terrorist thoughts with knowledge and culture,” she said.

Abdel Dayem told Daily News Egypt that in 2019 the ministry held over 70 book fairs across all governorates, some of them were the first to ever host book fairs, a path that she aims to continue this year.

“This policy will keep going in 2020, and we will start with one book fair gala that will take place in Port Said that was previously announced to be Egypt’s cultural capital 2020,” she said.

The 51st CIBF’s main highlights are the increased of number of participating publishing houses, reaching up to 900, with 153 more publishers than last year showcasing their books over 808 sections.

This comes fixing one of the biggest criticisms the General Egyptian Book Organization (GEBO) faced last year, which is banning a number of publishing houses from participating at the fair. This led some, including the Azbekeya bookstores, to inaugurate a parallel private book fair in order to compensate their loss.

Some 38 countries participate in this year’s round, with three more countries than last year’s edition and 925 cultural activities.

This year also marks the first time the fair has a mobile application, through which visitors get to explore the books of their favourite authors, and figure out their choices on display areas, prices, and a map on how to reach them. It also offers users a schedule of activities at the fair and their locations along with updates notifying users of registered changes in any of them. The application is to be out for public within two days, and available for both IOS and Android users.

Haitham El-Hajj Aly, head of GEBO, the body that organises the fair, explained at the press conference that this fair’s ambassadors are more of an advertorial campaign for internationally famed figures that have the effect of raising attention to it.

He said that in cooperation with Egypt’s Ministry of Transportation, public transportation has been asked to increase the capacity of their lines going to the book fair after complaints describing the new location as too far from the city centre.

“We are trying to avoid all the mistakes we had last year, and our only excuse is that, last year, we were still getting to know the place and explore its map. Now that we are fully aware of it, we are intensively working to take all of the notes we received last year,” he added.

The GEBO chairperson further pointed out that the budget of this year’s fair is still open as the “Ministry of Finance provided them with all of their needs in order to have the CIBF to meet international standards.”

The fair has four main halls: Gamal Hamdan, Africa, the future, and the cultural café. Through each, a number of activities, workshops, roundtables, and gatherings are to take place in order to discuss an angle of the main theme.

In Gamal Hamdan’s hall, a number of discussion tables are to take place with figures including artists and figures like Zahi Hawas, Nadilka Mandela, the granddaughter of Nelson Mandela, and Ministers Mohammed Mokhtar Gomaa, Inas Abdel Dayem, and Ashraf Sobhy.

In the Africa Hall, a number of discussion tables and initiatives are to discuss the relationship Egypt has with African countries, and tools of communication between both sides, especially younger generations.

As for the cultural café, it is mainly to discuss the jumps in literary formats, the way it depicts the reality, and reflects it over the years.

The CIBF will run until 4 February.