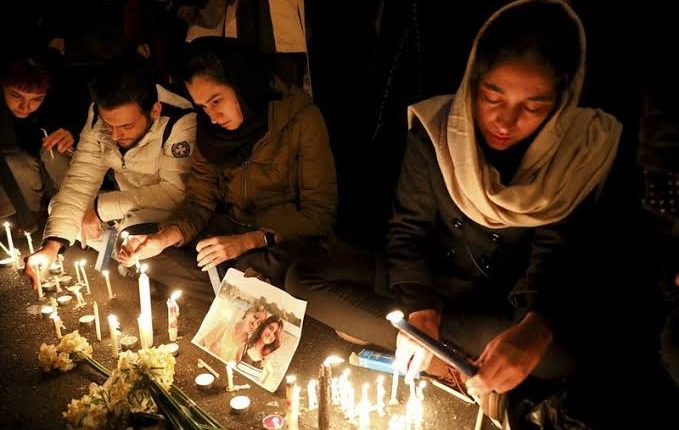 Iran’s police has denied firing at protestors as videos on social media recorded gunshots against the demonstrations after Tehran’s admission of shooting down a Ukrainian plane, a mistake which had killed all 176 people onboard.

Despite Iran’s denial of shooting the protesters, videos on social media have gone viral, recording gunshots against protests in Tehran. The video also showed blood on the ground, and wounded people being carried, while security forces were running with rifles in hand.

Shouting “death to the dictator,” the video showed demonstrators being hit by baton wielding riot police as people nearby shouted “Don’t beat them!” However, Hossein Rahimi, head of the Tehran police, stated that “at protests, police absolutely did not shoot because the capital’s police officers have been given orders to show restraint,” according to the state broadcaster’s website.

The protests erupted on Saturday when the Iranian military admitted hitting the Ukrainian plane by mistake, days after denying any responsibility for the plane crash.

Meanwhile, Iran dismissed US President Donald Trump’s tweets, saying although Trump had voiced support for Iranians, they will remember that he killed a top general and was the reason many were facing economic challenges, Iranian media reported.

Meanwhile, Iran dismissed tweets from the US President, saying that although Trump had voiced his support for the Iranian people, the country would remember he was the one that killed a top general and was currently overseeing the economic sanctions that are causing economic turmoil across Iran, reported Iranian media.

Ali Rabiei, Iran’s government spokesperson said on Monday that behind Trump’s demand for the safety of the protesters, referring to them as the “great Iranian people,” are “crocodile tears.”

Commenting on the detainment of the United Kingdom’s ambassador to Iran, Rob Macaire, Rabiei said Macaire had acted in a way that was “completely unprofessional and unacceptable.” The ambassador said on Sunday that he was attending a vigil not a protest and had left when it turned political.

Moreover, Lebanon’s Hezbollah leader Hassan Nasrallah, threatened to retaliate for the killing of Iran’s Major General Qassem Soleimani, aiming to remove all US forces from the region.

Nasrallah threatened that if US troops do not withdraw from the Middle East, “the American soldiers would return to the US in coffins.

He also denied Trump’s accusation of Soleimani plotting to bomb the US embassy, which was used to validate the US’s drone attack in Baghdad.

Nasrallah said, “Trump is lying to his people, Haj Qassem Soleimani was not planning to blow up American embassies.”

In a different context, The US Secretary of State, Mike Pompeo, expressed his anger over Iran’s attack on the Balad Air Force Base in Iraq, on Sunday.

Expressing his anger, Pompeo said on Twitter “Outraged by reports of another rocket attack on an Iraqi airbase. I pray for speedy recovery of the injured,” calling for the Iraqi government to “hold those responsible for this attack on the Iraqi people accountable.” He also stressed the need to stop what he described as “a violation of Iraqi sovereignty by armed groups.”

On Sunday, the Balad Air Base, which is used by American troops in Iraq, was hit by missile strikes, wounding an officer and three members of the Iraqi Air Force. Although the base was hit by eight “Katyusha” missiles, the Pentagon indicated that the attack did not leave casualties among the US military.

Meanwhile, violent clashes broke out in Karbala city southwest of Baghdad, after protests over Iran’s intervention in Iraq broke out. The protesters set the Badr Organisation office on fire. Trying to storm into the government building located in central Karbala, 10 protesters were injured, as Iraqi police forces used live bullets and tear gas to disperse them.

US supports Iranian protesters, denouncing ‘lethal force’ against them