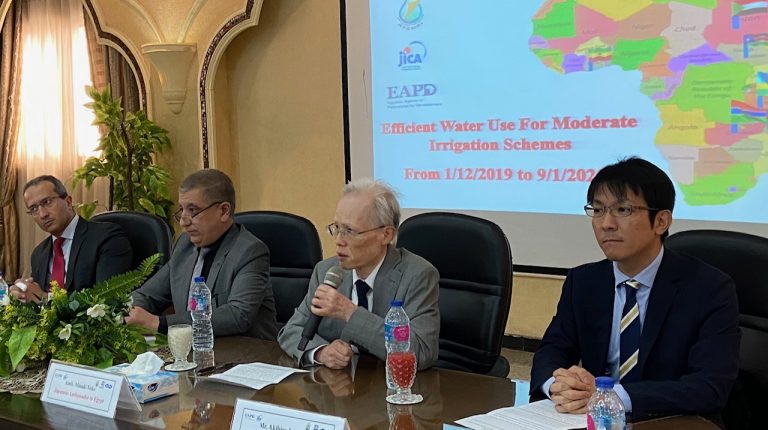 The training, titled “Effective Use of Water in Moderate Irrigation Goals”, aims at improving the efficiency of water resources management in African countries. It was held in coordination with the Regional Center for Training and Water Studies in Egypt.

Japan renewed its TCTP with Egypt and Africa in August 2019 over the 7th Tokyo International Conference on African Development (TICAD7) that was held from 28 to 30 August 2019.

Since 2004, the Japanese government has been cooperating with the Egyptian government in implementing TCTPs for African countries in the field of irrigation, with the participation of 327 trainees until 2019.

The 2019 training was attended by 19 trainees from eight countries, including five from the Nile Basin. The list of countries that participated in the training includes Ethiopia, Ghana, Kenya, Malawi, Sudan, South Sudan, Tanzania, and Zambia.

“The 2019 training was very important as Africa’s water problems are increasing and became more complex. Effective water use has become essential to the sustainable development goals (SDGs), as well as to Africa Agenda 2063,” Noke said.

The training is expected to contribute to improving the use of the limited water resources of the Nile River as it focused on countries from the Nile Basin, he added.

The training comes as a response to the outcomes of TICAD7 which was held in Yokohama last August. A memorandum of cooperation was signed then to promote South-South Cooperation (SSC) between JICA and the Egyptian Agency for Partnership for Development (EAPD), in the presence of President Abdel Fattah Al-Sisi, who co-chaired the TICAD7.

“As a result of the signing of this memorandum of cooperation, the Japanese government is seeking, in cooperation with the Egyptian government, to provide more effective support to African countries, and this training also comes as part of these endeavours and efforts,” Noke elaborated.

JICA started to apply TCTP in 1985, which is one of SSC schemes, where developing countries accept trainees from other developing countries with JICA’s assistance to carry out sustainable development projects like technology transfer, the agency’s Senior Representative Akihiro Iwasaki commented.

JICA’s Egypt office has been serving 50 African countries, where 270 training courses were provided for 3,861 trainees in the sectors of health, agriculture, water management, infrastructure, and business management.

TICAD7 is a summit-level international conference focusing on development in Africa. The conference was created in 1993 by the Japanese government to promote policy dialogue between leaders of African nations and development partners on pressing issues facing the continent, such as economic development, poverty, and conflict.

From 1993 to 2013, TICAD was held every five years. Since 2016, it is now held every three years, and alternates between Japan and Africa for the summit’s location.

Over 22 mln phone users in Tanzania are yet to register biometrically as deadline nears: official