In a surprise move in disputes between Ethiopia and Egypt over the Grand Ethiopian Renaissance Dam (GERD), Ethiopia has sought mediation from South Africa to interfere in negotiations. This move comes a day before the three ministers of irrigation from Egypt, Ethiopia, and Sudan are to convene in Washington on Monday for the final round of US mediated meetings.

Ahmed, who was already visiting South Africa this past weekend, justified this call, pointing to South Africa’s upcoming presidency of the African Union in February.

“Since Ramafusa is a close friend of both Ethiopia and Egypt, and also as the new president of the African Union, he can hold talks between the two parties to resolve the issue peacefully,” Abiy told a news conference in Pretoria, the political capital of South Africa.

“Ethiopia always believes in a win-win approach with Egypt and Sudan. We will follow the same track,” Abiy said. “Without having peace we can’t realise our vision of development and growth.”

South Africa’s public broadcaster SABC reported that Ramaphosa “has agreed to assist the Ethiopian government in solving its impasse with Egypt over the massive Nile dam project.”

“There must be a way in which a solution can be found. As for ourselves, we are willing to play a role in facilitating whatever agreement that can be crafted,” said the president 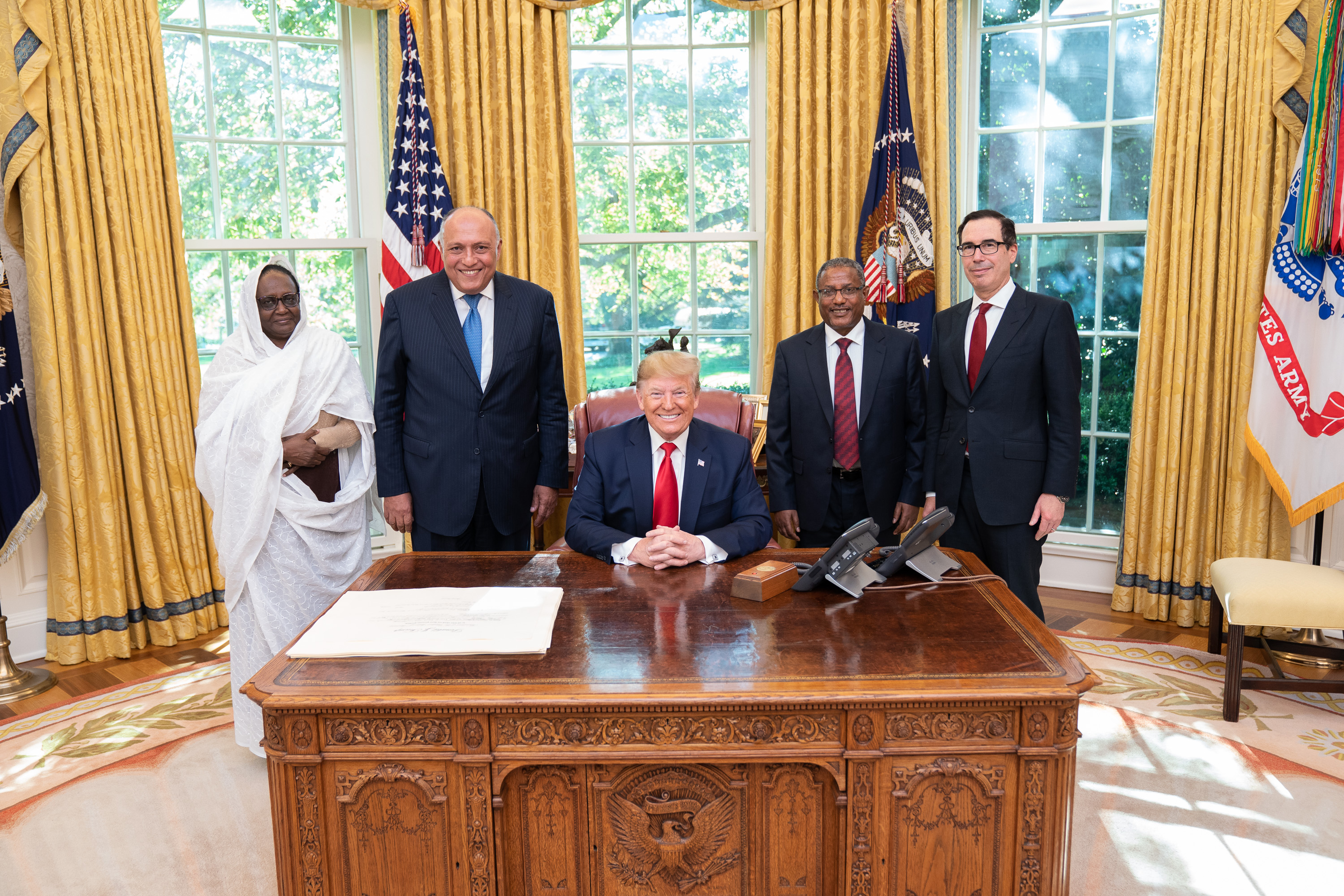 Washington is already a mediator to break the stalemate of negotiations over the Dam that Addis Ababa is building on the Blue Nile.

In November, Washington, hosted negotiations, mediated by the World Bank and the US Treasury, between the three Nile Basin countries.

The call raised questions on whether is it possible to hire a second meditator when there is already another country supervising negotiations.

Experts have been speculating that Washington may use its power to push the three parties to make acceptable concessions in order to reach an agreement that satisfies everyone. They further expect that Washington will continue to pressure the concerned parties with the aim of maintaining a path of peaceful negotiation and not resort to force.

Other observers also point to the possibility of Washington pushing towards international arbitration institutions in order to reach a final peaceful solution to the crisis, in case of a lack of agreement on issues concerning the filling and operation of the dam, and to avoid damages and risks, BBC reported.

Commenting onEthiopia’s call for South Africa’s meditation, Diaa Al-Qousi, water expert and advisor to the former irrigation minister, said that South African interference to solve the GERD crisis will not benefit anything.

He also mentioned that any offer from the Egyptian camp during recent negotiations and discussions, cannot in anyway be rejected or contested by Addis Ababa.

The expert suggested in a televised interview on Sunday that the Ethiopian side is trying to run out the clock in order to push their own agenda, but he expects Egypt to have a backup plan to deal with that.

Egypt has repeatedly stressed the need for the Dam to be integrated into the Eastern Nile Basin as a new water source in order to combat current, and eventual, droughts, flooding, and other climate disasters.

Mohamed El Sebaei, spokesman for the Ministry of Irrigation, previously said that during the past period, Egypt was engaged in negotiations with Ethiopia based on goodwill to reach a fair and balanced agreement that could achieve the common interests of the three countries.

Abbas Al-Sharaki, Head of the Natural Resources Department at Cairo University, said that what Addis Ababa was doing over the past 9 years of long negotiations wasted the international community’s time and efforts. He added that Egypt made all concessions to bypass environmental studies in order to reach a fair and legitimate compromise.

He also pointed out that if no real agreement is reached, Ethiopia will be the only loser seeing that the Ethiopian people only receive 10% of the electricity produced by the Dam due to a lack of proper infrastructure to properly distribute electricity. Sharaki said that the Ethiopian population is more spread out throughout the countryside and outskirts of the country, unlike Egypt where about 96% of the population stays close to the Nile.

Regarding possible solutions, he pointed out that Egypt has many solutions, including recording Ethiopia’s violation of past international agreements recognised by the United Nations, submitting a complaint to the African Union, and working to issue an international decision to stop the Dam’s work.

Despite all three countries agreeing to the four rounds of negotiations, there has been no real breakthrough over the GERD, and all that has really come about is more tension between Egypt and Ethiopia.

The discussions revolved around points of contentions, and Egypt, through its participation in those rounds, has tried to bridge points of views for all three sides, by presenting proposals and studies that guarantee the continued and efficient production of electricity for Ethiopia during periods of severe drought.

However, the three countries have been unable to reach a consensus over the GERD due to different hydrological conditions that the Blue Nile experiences. This has also been coupled by a lack of clear and practical procedures the dam’s operation from Ethiopia, specifically in cases of prolonged drought.

During the first rounds of talks in Addis Ababa, the three countries were able to reach a breakthrough consensus on filling the dams’s reservoir; a fair and equitable 7 year period to fill it. The filling of the dam has been one of the more severe points of tension between Egypt and Ethiopia for the past few years.

During the second round of discussions in Cairo on 2-3 December, the three countries addressed the technical issues concerning the GERD and its operation in coordination with Egypt and Sudan. The three nations also reviewed the outcomes of the first meeting.

Egypt proposed the alternative of maybe linking both the GERD in Addis Ababa and the High Dam in Aswan, Egypt in the interest of all three parties.

However, it was at the fourth and final meeting where negotiations reached a dead end, Ethiopia and Egypt announced that they were unable to finalise an agreement  over the filling period of the dam.

Egypt said that fourth round “did not lead to tangible progress, due to Ethiopia’s intransigence and adopting excessive stances, revealing its intention to impose the fait accompli and extending its control over the Blue Nile, and to fill and operate the Renaissance Dam without the slightest consideration of water interests of the downstream countries.”

Meanwhile, Egypt said that it did not specify a number of years, and that the number of years were agreed among three countries over a year ago. Under this agreement, the filling of the dam would take place in stages, depending on the Blue Nile’s yearly flow.

It further clarified that the new proposal submitted by Egypt ensures highly efficient electricity production for Ethiopia during times of drought while at the same time securing Egypt’s water interests.

Egypt further condemned the allegations of the Ethiopian Foreign Ministry that Egypt seeks to monopolise the waters of the Nile, as it accused Egypt of trying to reinforce “self-claimed sole ownership of the Nile waters”.

During Washington’s meeting the three countries are suppose to solve all disputed points before 15 January, as they previously have set a target to resolve their disagreements over the filling and operation of dam.  An international mediator will be appointed to help resolve the issue in case the three sides do not reach any agreement by 15 January, according to the deal the countries reached in Washington.

Egypt has previously described the idea of a mediator as proof of good intentions, stressing that Egypt tries to cooperate and resolve all issues through its diplomatic and peaceful channels.

Kifle Horo, the general manager of the GERD project said last December Ethiopia completed about 70% of the construction of the largest hydroelectric dam in Africa, and the entire project is expected to be fully completed in 2023, according to the Ethiopian News Agency (ENA).

ENA said that members of the Permanent Committee for Natural Resources, Irrigation, and Energy in the Ethiopian parliament visited the project and listened to explanations about the construction.

Horo stated that the committee in charge of turbine units nine and ten will be generating energy before finishing the entire project. The two turbines are planned to generate 750 megawatt (MW) of electricity by 2021.

Hero said that Ethiopia spent ETB 99 bn ($31bn) on the project, which still needs an additional ETB 40 bn to be completed.

For his part, the Ethiopian Water Minister, Selce Bickle, announced that the filling of the dam will start in July 2020, and the initial operation of the dam is to be completed by 2020.

GERD which is set to be Africa’s largest hydro-electric dam, has already relations tensed between Egypt, and Ethiopia. Ethiopia is constructing the dam on the Blue Nile in the Benishangul-Gumuz region some 40 km from the Sudanese-Ethiopian border.

The project started in 2011 with a cost estimated at $4bn and is expected to provide electricity for Ethiopia’s population of more than 100 million people.