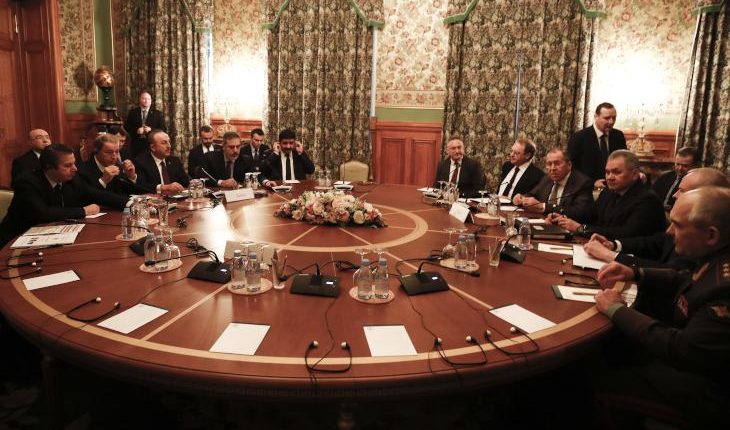 Libya’s warring leaders Fayez Al-Sarraj, the head of Libya’s UN-recognised Government of National Accord (GNA) in Tripoli, and Khalifa Haftar, commander of the Libyan Arab Armed Forces (LAAF) started a new round of peace talks on Monday in Moscow.

According to the Russian Foreign Ministry spokesperson Maria Zakharova, representatives of the Libyan parties have arrived in Moscow for talks, following a Russo-Turkish joint meeting

dedicated to the Libyan settlement.

Following the meeting, the Russian Foreign Minister Sergei Lavrov, said that the talks witnessed progress. His Turkish counterpart Mevlut Cavusoglu noted that Haftar requested time until Tuesday to decide about a ceasefire agreement.

The meetings come in accordance with the agreement reached between the presidents of Russia and Turkey on Wednesday, to announce a ceasefire in Libya starting Sunday 12 January, the call was accepted by both Libyan parties.

Turkey is supporting the GNA while Egypt and the United Arab Emirates are supporting the LAAF. Russian militants are fighting for the LAAF, but Russian President Vladimir Putin has denied any direct military involvement in Libya.

Meanwhile, President Abdel Fattah Al-Sisi discussed the Libyan crisis with German Chancellor Angela Merkel in a phone conversation on Sunday. During the call, Merkel briefed Al-Sisi on German efforts to reach a political solution for the Libyan crisis.

The two leaders exchanged points of views regarding the latest updates in Libya and their impacts on the region.

According to a statement from the Egyptian presidency, Al-Sisi and Merkel agreed that the political solution of the crisis should include its political, economic, security, and military sides as well as preventing illegitimate interventions in Libyan affairs.

On 19 January, Germany is set to host negotiations in Berlin on the Libyan crisis in order to allow both Libyan parties to meet and discuss problematic issues and help restore security and stability in the country following the two rivals commitment to the Russo-Turkish call for ceasefire.

Moreover, Egypt welcomed the move of unconditional ceasefire in Libya, expressing in a statement from the Ministry of Foreign Affairs its interest in any solution that could lead to saving Libyan lives.

The statement stressed the necessity taking Berlin’s political course of action, and to the comprehensive solution which keeps the integrity and unity of Libya and other Mediterranean states.

Egypt also highlighted the importance of countering all extremist groups in Libya and firmly rejecting any foreign intervention in the country, as well as dismantling the militias in line with the ceasefire.

The statement also called for reforming the Libyan presidential council, and respecting the roles of parliament.