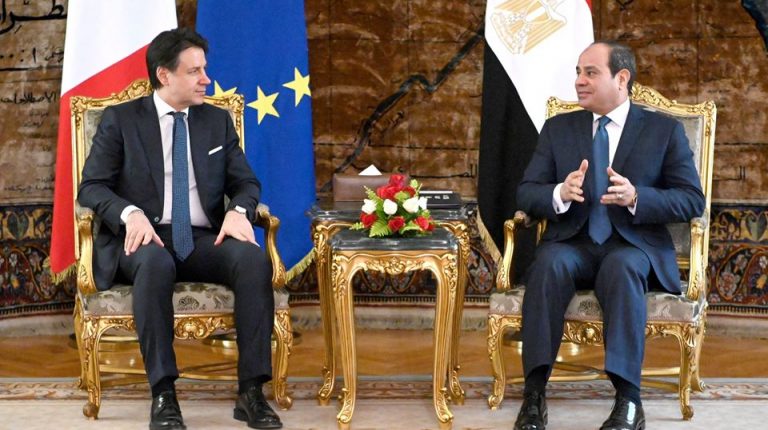 The leaders agreed on intensifying efforts to reach a political settlement to restore the stability of the North African country and support national institutions.

The pair also reviewed recent updates of investigations in the murder of Italian student “Julio Regini.”

Italy’s PM headed to Egypt after visiting Turkey on Monday where he met President Recep Tayyip Erdoğan. Conte stressed that any ceasefire in Libya would be “precarious” without a political process to firm it up, according to ANSA news agency.

Conte said that Italy supports “the process already mapped out under the aegis of the UN,” adding that the EU “will have a great role in Berlin but also Turkey and Russia will have one.”.

However, his rival Khalifa Haftar, the commander of the eastern-based Libyan Arab Armed Forces (LAAF), left Russia on Tuesday without signing the deal, TASS news agency cited the Russian Foreign Ministry as saying.

The ceasefire, which is brokered by Turkey and Russia, took effect in Libya at midnight on January 12.

Moscow was accused of supporting Haftar with private security forces from the Wagner Group of Russia. Haftar is also backed by the UAE, Egypt, France, while Turkey is the GNA’s main supporter.

Erdogan said on Tuesday that he would “teach a lesson” to Haftar if the latter continues “his attacks on the GNA,” saying that the Libyan commander “fled Moscow”.

The Al Arabiya TV channel cited sources who said that Haftar refused to sign the agreement because “the Russian draft ignored some demands of the LAAF.”

Haftar also refused any Turkish meditation and had reservations that the deals signed between Turkey and the GNA would not be paused.

Earlier this month, the Turkish parliament approved a bill that allowed the government to deploy troops to the war-torn country in support of the GNA in Libya. On 27 November 2019, Turkey, and the GNA signed two memoranda of understanding for military and security cooperation.