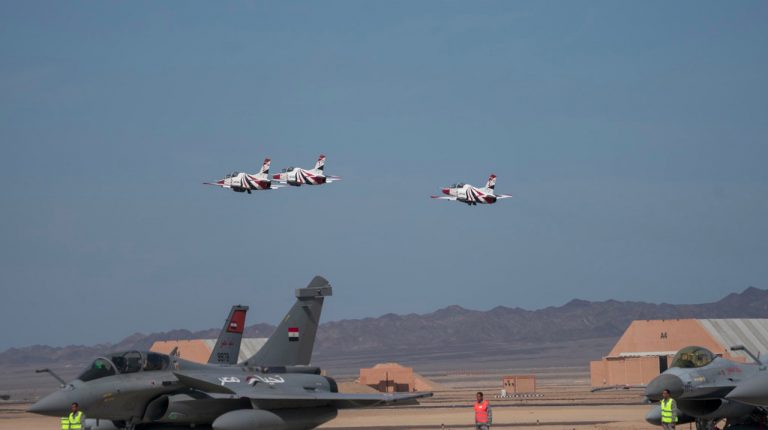 President Abdel Fattah Al-Sisi inaugurated on Wednesday Berenice military base, the largest military base on the Red Sea.

Egypt’s Minister of Defense and Military Production Mohamed Zaki, and Chief of Staff of the Armed Forces Mohamed Farid also attended the inauguration.

During the inauguration ceremony, a documentary was screened on maneuvering activities of Qadir 2020 drills, whose last round is currently taking place. It witnessed participation of Egyptian second and third field armies.

Egyptian army carried out a large-scale military exercises Qadir 2020. The manoeuvrer was carried on all strategic directions. The footage released show that all army formations and units participated in the exercises, including new military hardware which entered the service recently such as MIG-29M/M2 fighter jets.

Moreover, Presidency spokesperson said, “Bernice military base is one of a series of successes by the Egyptian Armed Forces, and it comes to develop and modernise the Armed Forces as part of Egypt Vision 2030.”

It was established within a few months and will strengthen the international classification of the Egyptian army. The base is aimed to protect the southern entrance of the Red Sea, securing navigation in the waterway that leads to the Suez Canal and associated economic zones.

It is located on the Red Sea coast near the southern border of Egypt. Built on 150,000 feddan area, it includes naval and air bases, a hospital, administrative buildings, and training areas for all weapon types. The project also includes Berenice International Airport and a seawater desalination plant.

In 2017, Egypt inaugurated its first military base “Mohamed Naguib” in Matrouh governorate, the largest in the Middle East.