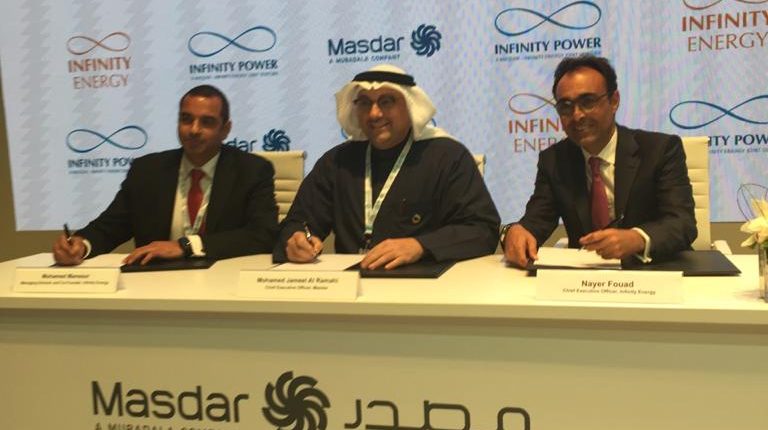 Infinity Energy and the UAE Masdar signed a partnership agreement on Tuesday to establish Infinity Power to implement renewable energy projects in Egypt and Africa.

Mohamed Mansour, Chairperson of Infinity Energy, said that the partnership with Masdar aims to achieve integration in expertise and resources, as well as the implementation of the projects in Egypt and Africa, especially as Egypt seeks to be a regional centre for energy.

Mohamed Al-Ramahi, CEO of Masdar, said that the establishment of Infinity Power will enhance the progress and development of renewable energy in Egypt and Africa, and a source of aspiration to provide opportunities to enhance Egypt’s goals in the field of renewable energy and expand the scope of energy accessability to African regions suffering from energy shortages.

The primary desire of the Emirati Masdar Company for entering into a partnership with Infinity Energy is the efficiency of the Egyptian company, which has reached a total electric capacity of 234 MW and is also the first company to implement projects in the solar energy feed-in tariff programme, and has a vision to implement renewable energy plants with a capacity of 1000 MW over five years.

Taymour Aboul Kheir, head of the investment sector at Infinity Energy Company, said that the agreement will start activation this year, and there are a number of projects to produce electricity from renewable sources, which Infinity Power plans to compete for.

He noted that partnership aims to provide the highest technology and the best financial offers to seize projects.

He said that the plan in Egypt is long-term and seeks to implement projects with capacities of up to 1000 MW as part of its keenness to cooperate with Egypt in implementing the renewable energy development plan until 2035, in addition to competition in African markets within the comprehensive plan for the development of the continent.

It is noteworthy that the European Bank for Reconstruction and Development signed an agreement with the Egyptian Infinity Energy Company last year to invest $60m in the company’s capital.

Infinity Energy was established in 2014, and it is fully owned by the children of late Egyptian businessman Ismail Lotfy Mansour. Its ownership structure is divided between Mohamed Mansour, Lotfy Mansour, Youssef Mansour, and Nair Fouad.

Finishing procedures, resolving renewable energy projects with a capacity of 1350 MW this year