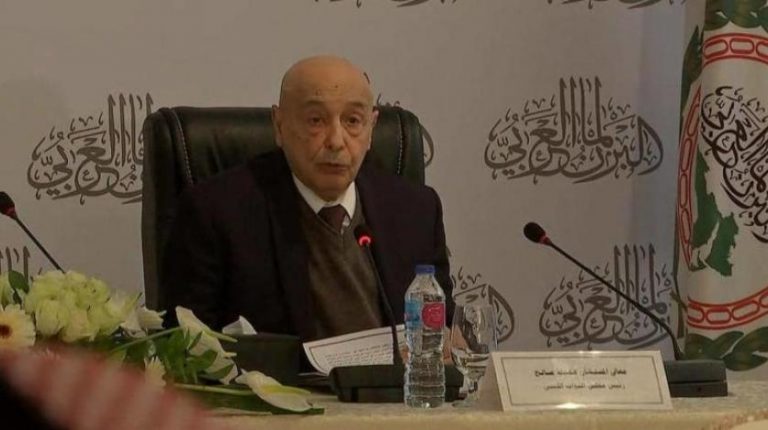 Libyan parliament speaker Aguila Saleh has called on Arab countries to confront “the Turkish invasion” into the North African country.

During a Wednesday session at the Arab Parliament, Saleh called Arab countries to conduct a joint Arab defence agreement.

Saleh, an alley to the eastern-based Libyan Arab Armed Forces (LAAF), said that terrorist militias control large territories in the capital Tripoli. He asserted that the LAAF will continue its mission to “liberate the Libyan capital.”

Saleh urged the international community to withdraw its recognition of the GNA, saying that its term already ended a long time ago.

Saleh said that the MoUs for military and security cooperation that were signed by Turkey and the GNA on 27 November aim to “Loot Libya’s fortunes and support armed militias.”

Libya’s rival leaders held talks on Monday in Moscow, mediated by Turkey and Russia, to sign a ceasefire agreement. Fayez Al-Serraj, who heads the Tripoli-based GNA, signed the ceasefire deal. However, Khalifa Haftar, the commander of the LAAF left Russia without signing.

A ceasefire, which is brokered by Turkey and Russia, took effect in Libya at midnight on January 12. However, clashes have renewed in some areas, according to AFP.

The fighting between the two Libyan rivals intensified since the signing of the Turkey-GNA accords.

Turkey began deploying troops to Libya, in what was seen as a major escalation. Ankara previously provided Al-Sarraj’s government with military equipment, including armoured vehicles and drones, according to the UN.

Haftar is backed by the UAE, Egypt, and France. The UAE provided Haftar with drones, the UN said.

The UN already denounced the UAE and Turkey and accused the two governments of violating the arms embargo imposed on the two parties.