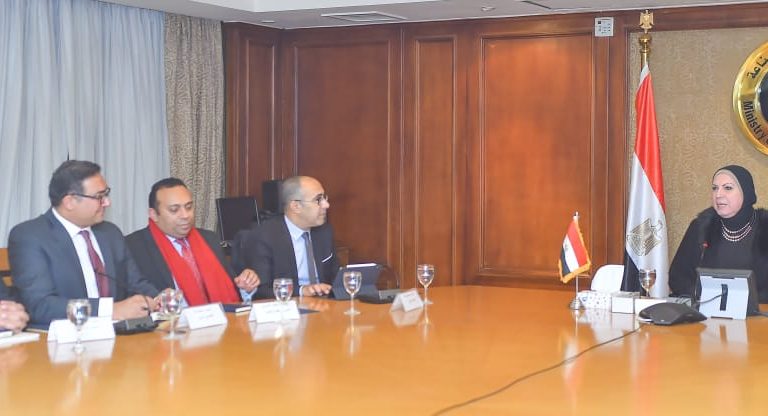 Minister of Trade and Industry Nevine Gamea met with a World Bank (WB) delegation headed by Sameh Wahba, Global Director for the World Bank (WB)’s Urban, Disaster Risk Management, Resilience and Land Global Practice, to discuss priorities of the next stage of Egypt’s economic reforms, according to a ministerial statement on Wednesday.

Gamea asserted the importance of maximising benefits from financial programmes offered by the WB to implement development projects that serve the national economy and create job opportunities for youth.

The Egyptian government is keen on improving the business environment to attract more local and foreign investments to the local market, reassuring that the ministry prioritises facilitating investment procedures, particularly for small and medium enterprises in addition to development of the industrial zones’ infrastructure and boosting the competitiveness of the Egyptian economy, the statement said.

The meeting highlighted the current projects that the WB supported in the Egyptian market and explored new opportunities of cooperation, the statement said. It also asserted that the Ministry of Trade and Industry was keen on providing investors with fully prepared and licenced industrial units as part of its efforts to ease businesses.

For his part, Wahba explained that the WB wanted to develop cooperation programmes with the Egyptian government to boost the country’s economic reform and attract investments, adding, “WB’s projects in Egypt are diversified and focus on developing competitiveness and infrastructure in the lower growth areas, as Upper Egypt.  Another WB delegation will visit Egypt next week.”

Additionally, the Ministry of International Cooperation (MIC) is for the WB’s board of directors’ visit to Egypt this month in coordination with the WB’s office in Cairo, a statement of the MIC revealed on 6 January, saying that this high-level visit is the first since 2014.

The visit includes meetings with senior Egyptian officials topped by Prime Minister Mostafa Madbouly as well as economic ministers to closely identify the updates of the economic reform programme in addition to government efforts to empower women, youth, and the private sector.

Minister of International Cooperation Rania Al-Mashat will hold a meeting with the WB’s delegation to discuss the future partnership strategy.

Ahead of the visit, Al-Mashat asserted the importance of talks, noting that MIC aims to deepen its partnership with the WB in the next few years and achieve new successful stories like the Benban Solar Park in Aswan.