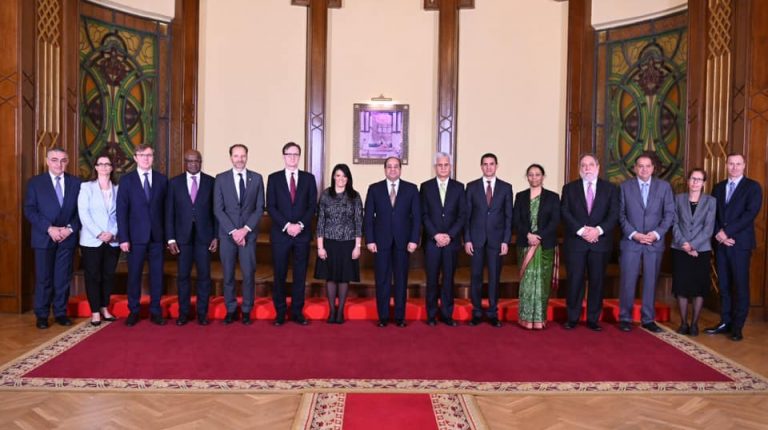 President Abdel Fattah Al-Sisi discussed with a high-level delegation from the World Bank (WB) recent developments regarding the Grand Ethiopian Renaissance Dam (GERD), in the presence of Rania Al-Mashat, Minister of International Cooperation, on Saturday.

The WB’s delegation included executive board directors, according to a statement from the presidency, noting that this visit is the first of its kind since 2014.

Al-Sisi highlighted the importance of the Nile River’s water for Egypt and its people, noting that there is a substantial difference between the right of development and the right of life and existence.

Al-Sisi asserted his keenness on continuing the fruitful cooperation between Egypt and WB to support the country’s efforts toward development, noting that the WB is a key development partner for Egypt.

Egypt’s economic indicators are recording positive results, thanks to the WB’s support and the Egyptian people’s will, Al-Sisi said.

For their part, the WB delegation reassured Egypt’s key role in the Middle East and African region, noting that Egypt succeeded in coming over the challenges that faced the country during the past years though a solid political leadership, a remarkable shoulder to shoulder of the Egyptian people to implement the economic reform programme.

Egypt became a successful model in achieving stabilisation and security, the team said, praising the government’s unprecedented social packages for the Egyptian people.

The delegation said that they realised deep positive changes in Egypt since their last visit in 2014, noting that their current visit to Egypt aims at identifying the Egyptian government’s efforts for the next stage of the reform programme.