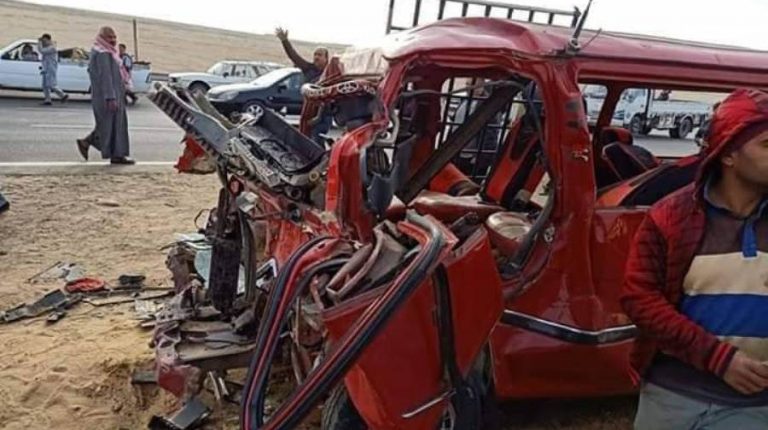 The Egyptian Medical Syndicate decided on Saturday to refer five senior officials in the Directorate of Health Affairs in Minya and the Health Ministry for investigation over a bus crash that killed four doctors and over a dozen injured while they were on duty.

Last Wednesday, a group of fresh graduates from Minya University’s Faculty of Medicine were forced to travel by bus from Minya to Cairo to attend a training programme in the capital. The Minya Health Directorate allegedly threatened that they would be penalised for their absence after they had requested postponing the training since they found no train booking, being the ideal transport means for them.

Families of the victims said a message was sent from the Directorate affirming that no apologies will be accepted and that those who would not attend the programme will be expelled from their medical departments.

Two doctors, the microbus driver, and another passenger died in the crash. One of the doctors who passed away was newlywed, while a pregnant woman injured in the accident later suffered a miscarriage, lost her child, and lost the ability to conceive again.

In a press statement by the Syndicate, it said the summon letters have been sent to Directorate leaders who are also officials at the ministry.

The Syndicate will also file a suit against the Ministry of Health calling for fair compensations for the victims and their families.

The Syndicate has a list of penalties including warning, fining, suspension of medicine practice for a period not exceeding a year, or cancelling medical licence in Egypt.

Secretary General of the Medical Syndicate Ehab Al-Taher said they decided last Friday to convene an ordinary general assembly on 13 March to discuss the issue.

The assembly will also address other problems regarding doctors’ salaries, pensions, work environment, the budget of the Ministry of Health, and the Medical Law, pointing out that Egyptian doctors have basic requirements that have not been fulfilled for years.

On Saturday, MP Magdy Malek called for an inquest of the prime minister and the minister of health over “the failure to provide appropriate occupational safety, salaries, and training for doctors working in the Ministry of Health.”

He said that correcting the situation requires urgent decisions to be taken, noting that the state exerted great efforts recently in the shape of health initiatives that have had a positive impact on all the Egyptians.

Following the Minya accident, Egypt’s Ministry of Health released a statement saying that the two health units where the deceased doctors worked would be renamed in honour of the victims and that the parents of the deceased would be sent to perform Hajj.

People on social media criticised the decision, as they expected a harsher response from the ministry than simply sending the victims’ families to perform Hajj, especially since one of the doctors was actually Christian.

3 killed and 54 injured in 4 road accidents

A week of unofficial black ribbons