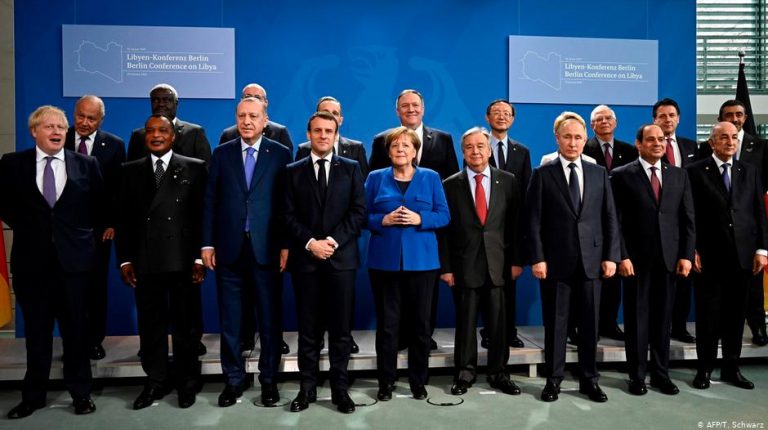 World leaders participating in Berlin Conference on Libya agreed on Sunday to support ceasefire, uphold Libya arms embargo, and set a roadmap for political solution in the war-torn country, German Chancellor Angela Merkel said after about four hours of talks.

They also agreed to end military support for the country’s warring factions.

“We agreed on a comprehensive plan forward,” Merkel said. “I can say that all participants worked really constructively together.”

President Abdel Fattah Al-Sisi met on Sunday with US Secretary of State Mike Pompeo in Germany on the sidelines of the Berlin conference on Libya. During the meeting Al-Sisi expressed Egypt’s keenness on deepening strategic cooperation with the US, to keep stability and security in the Middle East.

Al-Sisi and Pompeo discussed the Libyan crisis, as they agreed that the crisis could only be solved through a comprehensive solution which includes all its political, security, and economic sides.

Germany hosted on Sunday, a peace summit on Libya. The five permanent members of the UN Security Council; the US, Russia, the UK, France, and China presented in the conference. Italy, the United Arab Emirates, Turkey, Egypt, and Algeria participated. The Republic of Congo, representing Africa, and the Arab League attended the summit as well, while Tunisia expressed no desire to take part, and Morocco wondered why they were not invited to the meeting.

Berlin summit comes after the failure of Moscow negotiations in which Libya’s warring sides – Fayez Al-Sarraj, the head of UN-recognised Government of National Accord (GNA) and Khalifa Haftar, commander of the Libyan Arab Armed Forces (LAAF) – met for peace talks.

The meeting aims to reach a ceasefire agreement in Libya and to actually impose the already active arms embargo.

On Sunday, Russian President Vladimir Putin expressed hope over the conference to achieve some progress in the Libyan cause.

Ahead of a meeting between Putin and his Turkish counterpart Recep Tayyip Erdogan on the sidelines of the Berlin conference, the Russian leader said, “We did not lose hope for continuing dialogue to reach an end to the conflict.”

Moscow and Ankara have taken a good step by urging the Libyan parties to halt military actions, he added.

For his part, the Turkish president said that Haftar “must end his aggressive stance to pave the way for a political process in Libya.”

Ahead of the meeting, Haftar met with French President Emmanuel Macron and German Chancellor Angela Merkel.

According to a statement from the Egyptian presidency spokesperson Bassam Rady, Pompeo stressed his country’s commitment to increase cooperation with Egypt to achieve sustainable development.

The president expressed appreciation for America’s efforts in supporting the negotiations concerning the Grand Ethiopian Renaissance Dam, hoping for Washington to continue its efforts until comprehensive agreement is reached between the involved parties.