The external position report of the Egyptian economy was produced by the economic research sector in the CBE. The report tracked on a quarterly basis the international transactions that the Egyptian economy conducted. It relied, for this purpose, on the national statistics that are regularly compiled in line with the International Monetary Fund’s (IMF) Special Data Dissemination Standard (SDDS) prescriptions. The CBE noted that according to original maturity, external debt reaffirmed its usual pattern of long-term external debt predominance at the end of June 2019.

Moreover, by residual maturity, short-term debt accounted for 21.2% of the total external debt in FY 2018/19, compared to 10.2% classified by original maturity.

Meanwhile, medium and long-term external debt represented 78% of the total debt, in comparison to 89.8% by original maturity.

The report noted that other bilateral debt amounted to about $9.6bn, up by 26% compared to June 2018 and rescheduled bilateral debt reached about $3.1bn, down by 16.1%. 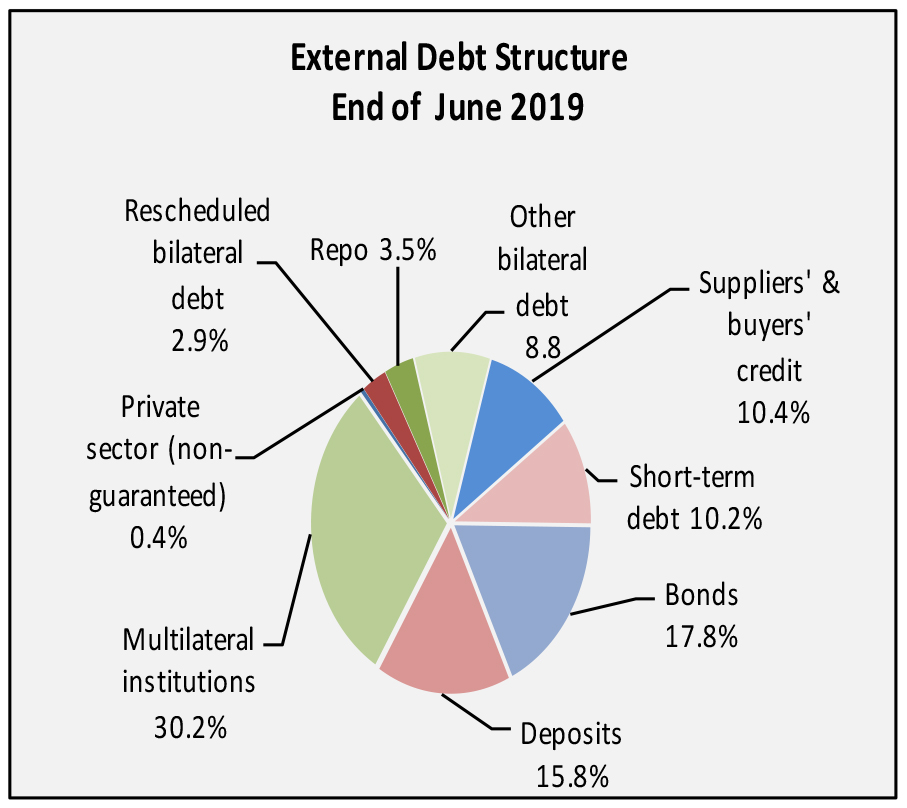 Measuring the currency composition of external debt was an important indicator that sheds light on its exposure to currency markets’ volatility, the CBE said.

The currency composition of Egypt’s external debt indicated that the US dollar is the main borrowing currency, with a value of $69.4bn, including other outstanding obligations in US dollar to creditors other than the USA such as international institutions.

However, repayment of instalments slightly decreased by about $0.9bn to $10.2bn. 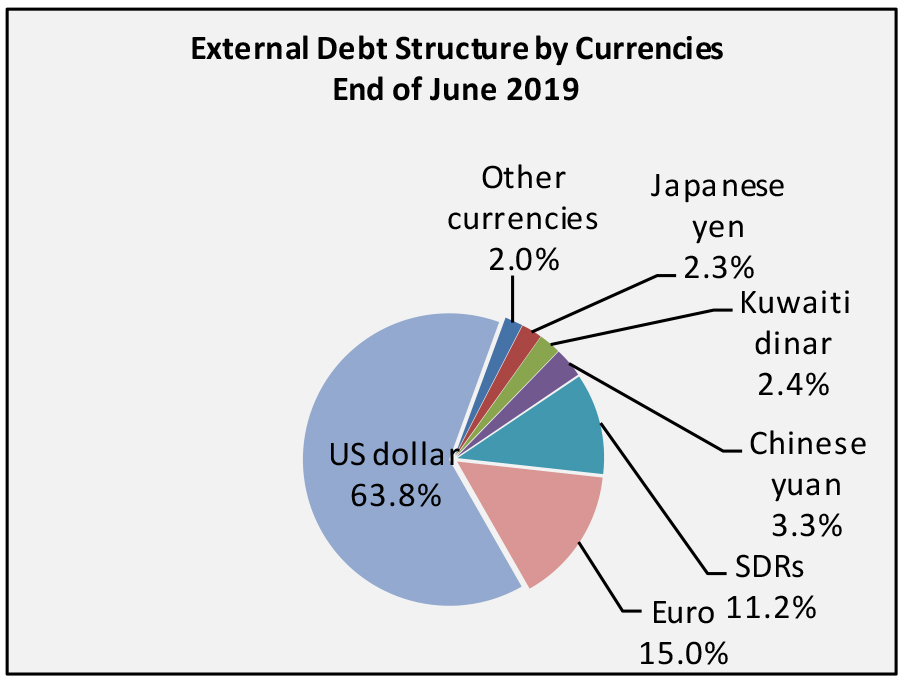 As for the external debt in terms of international comparison, the report said that Egypt’s debt remained within manageable limits. Based on IMF classification, Egypt’s key debt indicators compared to those of other regions showed that Egypt’s debt stock to GDP represented 36% in FY 2018/19 against 48.7% in Latin America and the Caribbean, and 47.5% in the Middle East and Central Asia.

Moreover, Egypt’s short-term external debt to total external debt represented 10.2% against 14.2% for Latin America and the Caribbean, and 21.3% for the Middle East and Central Asia.

Egypt’s debt service ratio registered 25.3% compared to 46.4% for Latin America and the Caribbean, and 23.1% for the Middle East and Central Asia.

On 3 November 2016, the CBE decided to liberalise the Egyptian pound’s exchange rate, to be quoted according to the dynamics of supply and demand. This decision came as part of the economic reform programme.

According to the foreign exchange market (buying price), all currencies depreciated versus the Egyptian pound, including Chinese yuan by 10.0%; pound sterling by 9.3%; euro by 8.3%; Kuwaiti dinar by 6.8%; US dollar, Saudi riyal, and UAE dirham by 6.6% each; Swiss franc by 4.7%; and Japanese yen by 4.6%.

“As the gains of the reform programme became clear and the foreign exchange resources increased, the CBE decided on 4 December, 2018 to terminate the Repatriation Mechanism for any new foreign currency portfolio investments,” the CBE said.

In FY 2018/19, the net international reserves (NIR) increased by $0.2bn, against an increase of $13bn a year earlier, to reach $44.5bn, thus covering eight months of merchandise imports.

The increase was a result of the rise in foreign currencies by $2.3bn and of gold by about $0.2bn, and the decrease of SDRs by $2.3bn.

During the preparation of the report, the NIR reached $45.4bn at end of November 2019, according to the CBE. Meanwhile, foreign currency deposits with banks increased by 6.8% during the period concerned, reaching $42.9bn at end of June 2019.

The report noted that Egypt’s International Investment Position (IIP) at end of June 2019 recorded net external liabilities (assets minus liabilities) of about $166.3bn, up by 12.9%, compared to $147.3bn at the end of June 2018.

Assets and Liabilities by Component

However, portfolio investments abroad decreased by 32.4% to about $1bn.