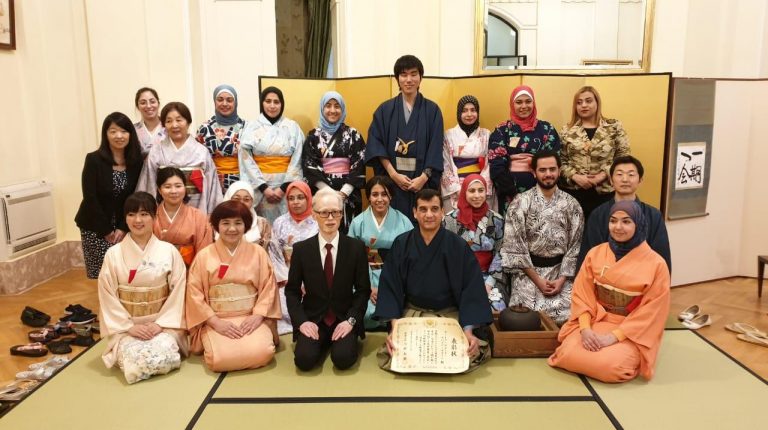 “This tea ceremony is a special occasion as it is the first in the new era “Reiwa,” which started with the assumption of the new emperor, so it has a special meaning,” the ambassador said during his welcome speech at the event.

The ambassador announced that the Japanese Foreign Affairs Ministry decided to deliver a certificate of appreciation to Egyptian Tarek Al-Sayed for his efforts in introducing the rituals of serving tea “Sado” to Egypt, enhancing mutual understanding and strengthening friendship between Japan and Egypt.

“For Japan, the name of the era has changed since last May, and a new era called “Reiwa” has begun.

Among the meanings of the word “Reiwa” is that culture grows and flourishes in a society where people live in harmony and affection,” the ambassador said.

There is a great correlation between the new era’s meaning and the atmosphere in which Japanese tea is offered, the ambassador elaborated, noting that the way Japanese tea is presented may seem like one of the rituals, but there is a deep meaning behind this which is feeling of caring for the guest, respect for the other, and diligence lies in his hospitality.

“During the Japanese tea ceremony, the host takes care of the guests, and this is obvious through the good preparation of all the used tools, and the ritual of serving Japanese tea brings together the guest and the host, as well as between the guests and each other, so everyone has one feeling which is serenity and mutual respect,” the ambassador emphasised.

Within the framework of revering feelings of care for the other or the guest, the rituals of serving Japanese tea are not only about enjoying tea, but several different cultures have been merged and developed in the form of comprehensive art,” the ambassador said.

Comprehensive art is usually seen within the atmosphere of serving tea such as the tea room and the Japanese garden surrounding it, the decorated tea cups, the flowers, and paintings that decorate the tea room according to the season, as well as Japanese desserts for the tea party. This goes along the rituals of etiquette and guest hospitality.

Over the event, Al-Sayed and his Egyptian-Japanese team served Japanese tea for the attendees as an important part of Japanese culture, expressing his gratitude for the certificate of appreciation that the ambassador delivered him on behalf of the Japanese Foreign Affairs Ministry.

“I thank the Japanese embassy and Japan Foundation for their support as well as my team who stands behind my success,” Al-Sayed mentioned.