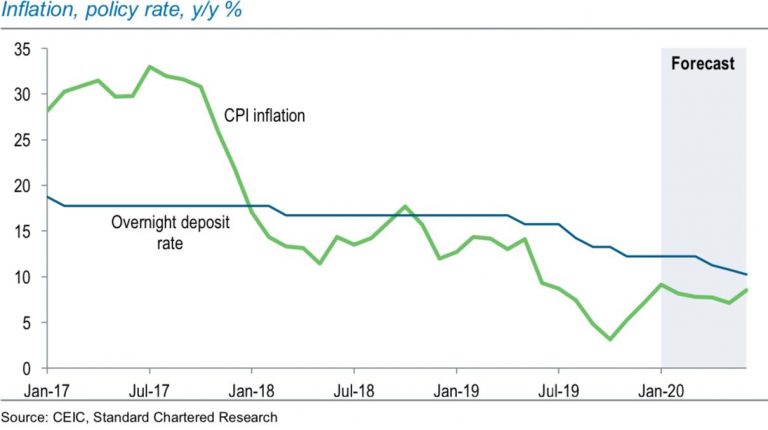 The Central Bank of Egypt (CBE) left overnight deposit rate unchanged at 12.25% on 16 January, surprising market and analysts expectations of easing. Standard Chartered expected a 50bps cut but highlighted the risk of a hold decision. The CBE decision stood in contrast to rate cuts by Emerging Markets (EM) peers in Turkey and South Africa earlier on the same day.

With the economy at its highest growth since fiscal year (FY) 2008 recording 5.6% in the first quarter (Q1) of 2020, the CBE reiterated its commitment to the 9% (+/-3ppt) inflation target for 4Q 2020. The CBE also noted that since 2019, private domestic demand  outpaced net exports as the primary growth deliver. This domestic demand revival, in the context of recent 350bps of rate cuts, appears to have formed the basis of the on-hold decision.

However, with core inflation still at 2.4% year over year (YoY) in December 2019, Standard Chartered believes that the CBE’s primary concern may be the implications of a stronger domestic economy on the external account rather than on inflation. They have long argued that the Egyptian Pound’s strength would gradually erode the external competitiveness that has benefited Egypt’s rebalancing.

In context, the CBE’s decision to keep rates on hold, with Egypt continuing to offer attractive real rates to foreign investors as a result, appears unlikely to stem EGP strength any time soon.

The CBE said it would “not hesitate to resume its easing cycle” should inflation moderate further. The recent rise in Consumer Price Index (CPI) inflation was widely expected due to base effects, as the CBE noted. While inflation may remain elevated in the coming months, it is likely to be well contained, in Standard Chartered analysts’ view.

As such, they maintain their expectations of another 200 bps of rate cuts in FY 2020. Nevertheless, given the CBE’s cautious tone, risks to their call for rate cuts have increased.