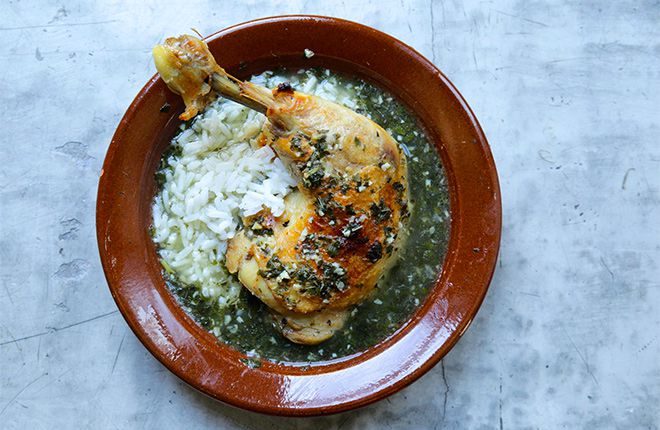 Egypt’s Downtown, a place one can go to experience the most beautiful architecture that showcases Egyptian social class and heritage, has many small restaurants tucked away in its alleyways that make some of the most mouth-watering dishes Egypt has to offer. Fasahet Somaya, (Somaya’s Open Place) is one of these places, and CNN recently selected it as one of the best restaurants for Egypt’s world renowned Molokhia.

Fasahet Somaya is a small restaurant, located in Huda Shaarawy street. The Egyptian cuisine is named after his owner, Somaya Al-Asyoty. The cosy restaurant is designed make you feel right at home and visitors are welcomed to enjoy Somaya’s home cooked meals every dinnertime.

The nine-year-old restaurant opened its doors when the owner feltthat her passion for food should go beyond her close circle of friends.

From only a few regular attendees, to thousands of visitors everyday, Fasahet Somaya is currently one of the most famous hubs of Egyptian food for Downtown residents.

Unlike any other restaurant, Fasahet Somaya does not offer a wide menu to select from. It only serves two or three dishes, which she cooks differently. Opening for two hours only, Somaya usually closes her doors before seven, as she regularly runs out of food due to high demand.

Somaya, who masters the art of home cooking, does not have a set menu for weekdays. She is known for roaming the market and getting whatever calls to her. Through the restaurant’s Facebook page, she announces what’s on the menu for the day along with its price, which is always quite reasonable.

The always smiling lady, personally serves her visitors, and has even become familiar with some of her regulars, who come to eat regardless day’s menu, as she frequently mentions in a number of Televised interviews.

Somaya’s most famous dish is Molokhia, one of the reasons behind her fame in the big city of Cairo. The home-made and mouth-watering plate is one of the most unique plates one can ever try in Cairo, especially if one gets to catch a meal at Somaya’s place.

Molokhia (also known as Jew’s mallow) is considered the national Egyptian dish, along with fava beans. The green soup is usually made with chicken, lamb, rabbit, shrimp, or even fish. However, it is most known in Cairo to be served with chicken or rabbit.

Soup is widely spread across the Middle East and North Africa, however, it is cooked differently in Egypt, where the leaves’ spine is removed before they are finely chopped and cooked with chicken or meat broth with a pinch of garlic and coriander.

Molokhiya was consumed in ancient Egypt, where the name “molokhiya” is thought to originate from.

The plate is added to CNN’s must try Egyptian foods, along Falafel, Fattah, Mahshi, and liver.

Egyptian proverbs, an exercise in classicalism