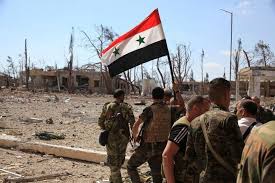 The Syrian army continued its heavy shelling on rebel positions in the western countryside of the northern province of Aleppo as a prelude to a large-scale military operation against the rebels, the pro-government al-Watan newspaper reported Sunday.

The army also responded to a massive counter-offensive on government forces’ positions in the nearby province of Idlib by the al-Qaida-linked Nusra Front, the newspaper added.

Meanwhile, the Syrian Observatory for Human Rights said as many as 6,000 people have fled their areas in the western countryside of Aleppo over the past 72 hours as a result of the military campaign.

The families fled to the nearby northwestern countryside of Idlib and the Turkey-held enclave of Afrin in northern Aleppo countryside, according to the Britain-based watchdog.

The observatory estimated the number of civlians in the western and southern countryside of Aleppo at around 500,000.

The anticipated army offensive in western Aleppo countryside aims to secure the Hama-Aleppo road as part of an agreement reached in Russia’s Sochi in 2018 to secure the official road to Aleppo, which extends all the way south to the capital Damascus.

Since the Hama-Aleppo road is under rebels’ control, people have travelled to Aleppo through another extension of the road.

The army is now considering the recapture of the entire road between Hama and Aleppo as a top priority, in order to restore the travel route from Damascus in the south to Aleppo to the pre-war time without a detour.