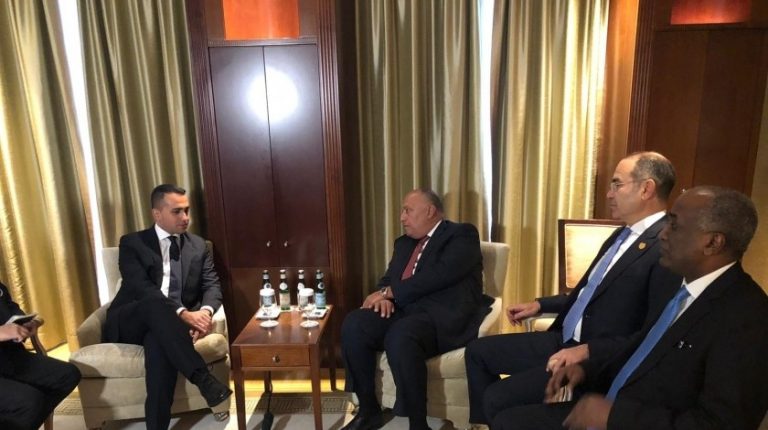 Egypt’s Minister of Foreign Affairs Sameh Shoukry has discussed regional developments with foreign officials on the sidelines of Berlin conference on Libya held on Sunday.

He met with High Representative for Foreign Affairs and Security Policy of the European Union Joseph Burrell.

According to a statement by the spokesperson of the Ministry of Foreign Affairs, Ahmed Hafez, the meeting included exchanging views on the regional situation and its developments, specially the Libyan crisis and agreed on the necessity of the peace conference’s political efforts to achieve comprehensive settlement.

They further discussed strengthening efforts to combat terrorism, stop manifestations of chaos, and address the phenomenon of illegal immigration in Libya.

Shoukry also met with his Italian counterpart Luigi Di Maio on the sidelines of the conference. They discussed topics of common interest between the two countries. The officials also discussed efforts for a comprehensive political reconciliation in the Libyan crisis.

Berlin’s conference comes following failure of negotiations in Moscow where Libya’s warring leaders of the UN-recognised Government of National Accord in Tripoli Fayez Al-Saraj,and Commander of the Libyan Arab Armed Forces (LAAF) Khalifa Haftar failed to reach a compromise. .

The conference started on Sunday with the aim of settling the crisis in Libya by stopping influential foreign powers from interfering in the war through providing weapons, troops, or finances.

Officials of states that are concerned with the Libyan crisis and representatives of international and regional organisations including Egypt, the UK, and the US attended the conference.