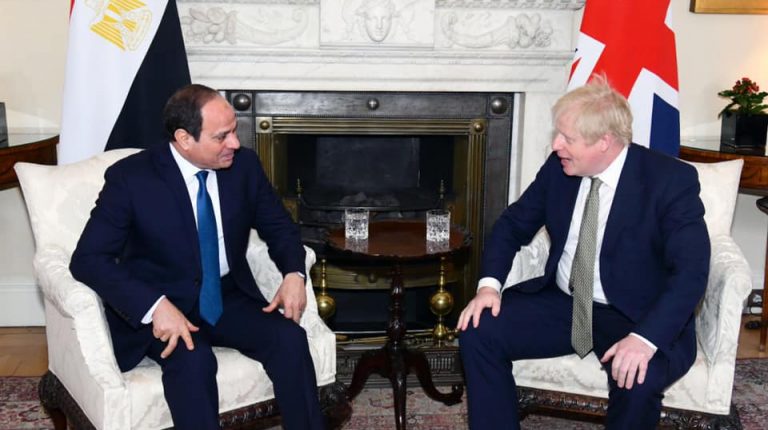 During the meeting, they also discussed ways to coordinate efforts in countering terrorism and illegal immigration. The meeting also tackled the developments in several regional and international issues, including the Libyan crisis. Both sides agreed to concert efforts to settle the situation in Libya.

Johnson asserted the UK’s desire to improve economic relations with Egypt in all fields, expressing the kingdom’s appreciation for Egypt’s pivotal role in stabilising the Middle East and Africa region.

He also hailed the president’s strategic vision in the field of development, enhancing the economic and social fields, in addition to establishing major national projects, particularly the New Administrative Capital, asserting his support to the ambitious measures undertaken by Egypt in pursuit of comprehensive development.

Later, Al-Sisi met Prince William, Duke of Cambridge and the son of the Crown Prince, at the Royal Buckingham Palace in London. Al-Sisi expressed his appreciation for the warm welcome, praising the deep Egyptian-British relations.

Al-Sisi expressed his desire to maximise British investments in Egypt, especially in the fields of tourism, education, and trade.

For his part, Prince William praised the reform measures taken by the Egyptian government, and hailed the major national projects implemented recently.