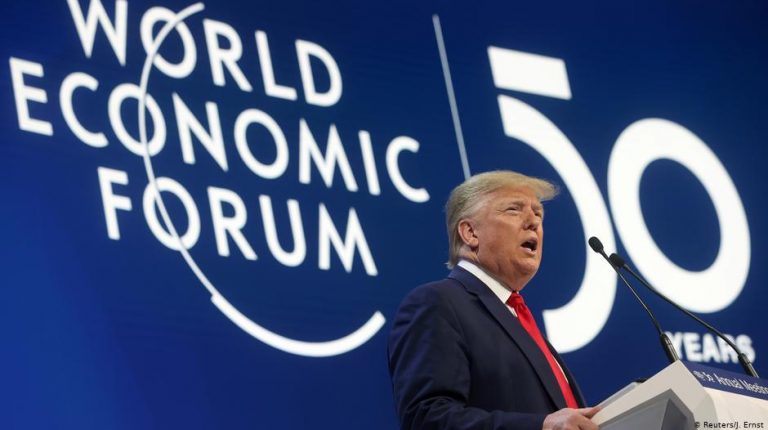 The 50th annual World Economic Forum (WEF) 2020 in Davos, Switzerland, kicked off on Monday and will last until Friday, 24 January with a large international participation. Egypt is present at the event.

US President Donald Trump, teen climate activist Greta Thunberg, and Uber boss Dara Khosrowshahi are among the guests. Trump addressed the forum on Tuesday after skipping the event in 2019.

Trump’s appearance comes on the same day his impeachment trial begins in Washington.

He praised his economic achievements, and said the US is thriving and winning again like never before, while Thunberg stepped up her criticism of governments and companies for not doing enough to tackle climate change.

Thunberg called on the world’s polluters to aim for “real zero” carbon emissions rather than “net zero” and said, “our house is still on fire.”

“We demand participants from all companies, banks, institutions, and governments to immediately halt all investments in fossil fuel exploration and extraction, immediately end all fossil fuel subsidies, and immediately and completely divest from fossil fuels,” she mentioned.

On the same day, environmentalist Jane Goodall and former US presidential candidate Al Gore will discuss the future of the world’s largest rainforest at a session titled “securing a sustainable future for the Amazon.”

On Thursday 23 January, United Nations Secretary General Antonio Guterres will deliver a special address to WEF attendees. On the same day, German Chancellor Angela Merkel will give a special address to Davos attendees while Gebran Bassil, leader of Lebanon’s Free Patriotic Movement, will speak in a session titled the return of Arab unrest.

On Friday, European Central Bank President Christine Lagarde will take part in a discussion on the outlook for the global economy with Deputy Managing Director of the International Monetary Fund (IMF) Zhu Min.

Representing Egypt, Rania Al-Mashat, Minister of International Cooperation (MIC) is meeting with several international financial institutions for future cooperation on the sidelines of the WEF, according to a statement from the MIC of Tuesday.

WEF focuses on a range of global issues, like coming over the environmental challenges that threaten the world, society and the labour future, in addition to using technologies in people’s service, enhancing trade activities, granting a better medical future, and making economies fairer for all, the statement said.