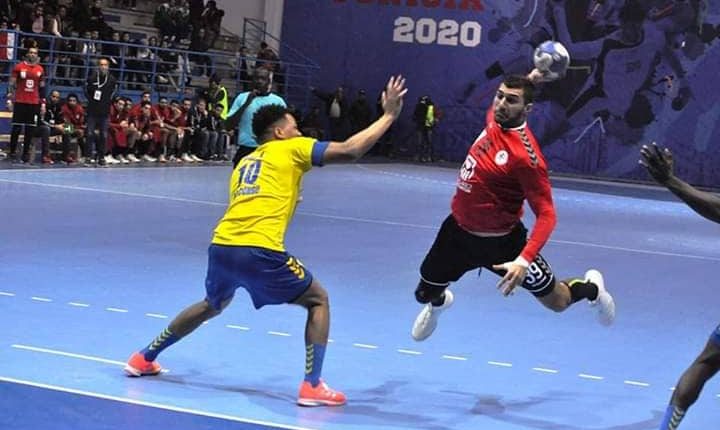 Egypt will face Angola on Wednesday at the Salle Omnisport de Radès in the 2020 African Men’s Handball Championship quarter-finals. The 24th edition of the championship will run until 26 January.

In Group I, Egypt thrashed Gabon 36-17, while Angola beat DR Congo 30-25. Egypt and Angola now share the lead of the group with four points each, and their next clash will determine the first place. However, both of them have already secured their seats in the semi-finals.

Led by coach Roberto García Parrondo, Egypt target winning the title to secure a seat in the upcoming Olympics. The Pharaohs won all their group stage games against Guinea, Kenya, and DR Congo.

Parrondo gave a rest to some players in the Gabon clash to recover and get ready for the semi-finals.

Moamen Safa, head of the Egyptian mission in Tunisia, held a meeting with the players and demanded them to maintain their high morale and focus on the next few games as they will clash with strong opponents.

He stressed the Pharaohs are capable of winning the title and qualifying for the Olympic Games in Tokyo.

The national handball team for Egypt will meet at 5 PM today Angola, in the second round of the quarter-finals of the African Nations Championship currently held in Tunisia, which will continue until 26 January, which also qualifies for the Olympic Games in Tokyo.

Moamen Safa, the Egyptian Handball Federation’s treasurer and supervisor of the national teams and head of the current mission in Tunisia, was keen to sit down with the players and demand them to maintain the high spirit and intense focus in light of the difficulty of the remaining matches of the pharaohs in the tournament.

He stressed the ability of the Pharaohs to return with the cup and qualify for the Olympic Games in Tokyo.

The new Zamalek channel is scheduled to start official broadcast on Wednesday via the Nilesat satellite. The channel prepared 8-hours TV shows for the opening day.

The opening show will include the full team of football technical analysists and artists who support the club, such as Medhat El-Adl and Ahmed Hatem, and Zamalek legends Farouk Gaafar, Hazem Imam, and Gamal Hamza.

Zamalek President Mortada Mansour said the club’s football players who did not participate in the promo will be featured in another promo, including Mohamed Abu Gabal, Shikabala, Achraf Bencharki, Mostafa Mohamed, Mohamed Ounajem, and Ahmed Sayed (Zizou).

Mansour will host a daily show on the channel to talk about the club’s affairs and everyday issues.