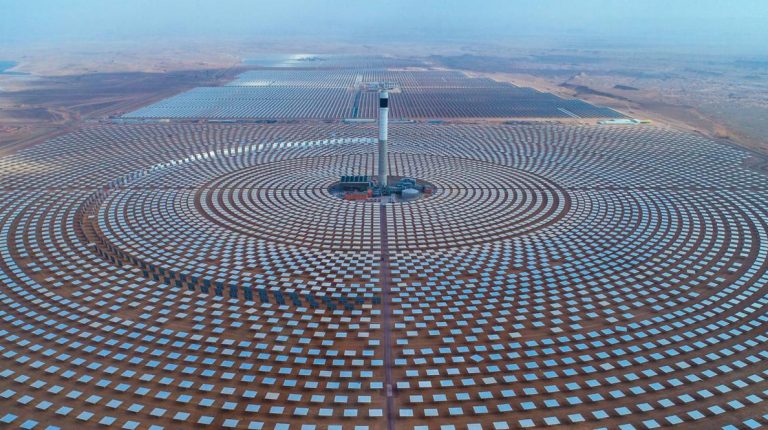 Solar Outlook Report 2020 highlighted the fact that the main components of Benban Park have been completed with 1.4GW commissioned and a first contract for 200MW in Kom Ombo allocated, while in UAE Noor Energy Solar Park, entered commercial operation in mid-2019 with 1.17GW, also a 900MW PV IPP project in the Mohammed Bin Rashid Al Maktoum Solar Park in Dubai was awarded at a world record low bid of $0.0169 per kWh.

The report indicates that the total corporate funding in the global solar sector saw an 11% increase year-on-year at $109.4bn in the first half of 2019. More than $2.6trn has been invested in renewable energy over the past decade.

Global solar power capacity increased by more than 25 times in this decade, from 25 GW at the beginning of 2010 to 617.9 GW anticipated by the end of 2019. Overall investment in the MENA energy sector could reach $1trn between 2019 and 2023, with the power sector accounting for the largest share of the spending at 36%.

According to MESIA, investment in commercial-scale solar development in the MENA region faces several challenges but also opportunities.

The report cites grid parity as one of the main issues facing renewable energy projects in the region, followed by policy and legislation – most markets require government support to encourage the

Another challenge is the shortage of required skills to meet the demand. Thus, the report indicates industry can play a major role in supporting the development of training and fostering local talent which will play a key role to increase the solar industry throughout the region.

Finally getting the needed finance remains a hurdle according to the report, however, MESIA believes that as the region’s renewable energy market matures, lenders use progressive financing mechanisms, such as soft short-term loans which can encourage developers to refinance after a set time, to lower lending costs.

One of the top trends cited in the report is the reduction in solar prices, citing Dubai’s 900 MW solar tender hit another low-price record with $0.0169 per kWh.

Consequently, the continuous drop in costs for solar panels is one of the factors that have contributed to reducing capital expenditure (CAPEX) of utility-scale projects. It is important to note that the reference prices for solar electricity usually refer to utility-scale ground-mounted solar; however, the decrease of panel prices has also contributed to make rooftop solar a more viable option for businesses.

Another notable trend is energy storage, MESIA indicates that several MENA countries are looking to energy storage. The niche market of storage solutions evolved, and its competitiveness increased. “So far, molten salt is used both as a heat transfer fluid (HTF) as well as a thermal energy storage medium. Similarly, lithium batteries’ efficiency properties are still the best compared to many substitutes entering the market. Ongoing R&D is looking at reducing levelized cost of electricity (LCOE) through the use of a thermal storage medium that is capable of a wider temperature range than molten salts – the current state of the art storage fluid used in tower CSP. Hydrogen as a storage solution is also an up and coming technology. It should be noted that first compressed air energy storage projects are also being launched,” the report stated.

Furthermore, MENA started to adopt high output modules, called bi-facial, are offering high efficacy modules in the market, according to the report. These bifacial modules use both its front and rear side of the solar panel, to increase generation. The report indicates that such methods can increase power generation gains by more than 25%, bifacial technology is expected to increase in the region and has already been implemented in Egypt’s solar park in Benban.

Another cell technology mentioned in the report is the half-cut cell, which offers lower resistance losses and improved shading performance. This technology also has the potential to improve reliability as the operating current of each cell is reduced by 50% and mechanical failures risks decrease due to the smaller size of each cell. Also, a new type of cells called perovskite solar cells can absorb light more efficiently than silicon cells, allowing them to be extremely thin, yet, their current challenges include toxicity, stability and lifespan issues due to sensitivity to air and moisture.

Moving from the cell technologies, the report highlights new ways of utilising solar power, such as the floating solar, where floating PV arrays are mounted on platforms in the water instead of rooftops or land-based areas, to allow the conservation of land for other purposes than power generation.

According to the report, floating solar brings several advantages, allowing self-buoyant bodies for PV panels to be directly affixed at tilted angles, reducing CAPEX due to limited site preparation and construction work hydro plants, water reservoirs or lakes and a few on the sea, reducing OPEX as a result of minimal cleaning.

Furthermore, floating solar can reduce water evaporation as solar panels cover the surface of water curtailing algae growth, improving water quality. However, environmental concerns, such as possible habitat loss resulting from blocked light, and risks, in particular for materials in highly salted water, remain and need to be further studied.

Another new technology is Building Integrated PV (BIPV), which could be implemented with the use of organic PV or concrete PV cladding. However, BIPV applications are still developing in the MENA region with very few installations.

Organic Thin-film PV is also a new frontier, were thin-film cells are formed by depositing extremely thin layers of PV semiconductor materials onto a support material such as glass,

stainless steel or plastic. This technology leads to higher flexibility, ultra-low weight, and an ultra-thin solar solution. OPV projects are expected to be launched in the MENA region mid- to end-2020, latest by 2021.

Moreover, robotic cleaning, which aims to resolve a critical issue in the solar power industry, as solar plants are suffering from 0.4-1.1% of power output losses on panels due to soiling. The longer the dust is left on solar panels, the greater these numbers increase. However, the way cleaning robots are attached to panels affects some variables that have a bearing on the lifetime of a

Project, and the effectiveness of the cleaning process. To date, panels are still showing damage over time with some types of robots and many systems are beginning to fail after operating in harsh desert conditions.

Finally, Distributed solar is on the rise, and it is believed to play a growing role in the

future in the optimisation of the new energy mix. In Egypt, all administrative

buildings in the New Administrative Capital are expected to be equipped with a solar rooftop.

The report indicates that intermittency has been one of the main issues for the wider adoption of solar energy. Increased competitive storage solutions are, however, quickly changing the landscape. MESIA believes that storage solutions supplying a demand for 24 hours seems to be within reach. CSP projects are anticipated to reach 16 hours of energy storage in the upcoming projects in the UAE, and Morocco.

PV storage is important in MENA countries to increase competitiveness subsidised fossil fuel because although such countries benefit from the high level of solar irradiation, giving solar energy an advantage to produce power during the day, intermittent solar energy is at a disadvantage.

CSP is still marginal, and considered to be expensive; however, in 2018, the MENA region’s CSP capacity had doubled compared to the previous year reaching 725 MW of installed capacity, according to the report. It is expected that CSP projects will become even more competitive in the future.

However, dealing with dust, humidity, and other atmospheric substances that affect the system’s efficiency remains the main concern in MENA. UAE and Morocco are the top countries in CSP projects in the MENA region. The Noor Midelt Hybrid Solar Plant (800 MW) in Morocco, is expected to start commercial operation in 2022, while in the UAE, the Mohammad Bin Rashid Solar Park Phase IV (950 MW) will feature the tallest solar tower (260 meters) using parabolic CSP and PV.

The report indicates that as Egypt’s electricity demand reaching up to 27.6 GW in 2019 and a forecast, by Frost and Sullivan, of 67 GW in 2030, the country needs substantial additional power capacity.

and encourages the C&I sector to feed the electricity into the national grid. The maximum capacity allowed recently increased from 5 MW up to 20 MW.

However, the report explains that such projects, mostly PV, are still limited due to intermittency and power stability issues, and their further development will depend on the increase of storage capacities.

Moreover, the Renewable Energy Feed-in Tariff (REFIT) programme, which ran between October 2014 to 2016, targeted large-scale renewable energy projects for a total of 4,300 MW of solar and wind by 2017. It had a decisive impact and resulted in some 20MW to 50 MW projects. Besides, the programme proposed tariffs for residential distributed PV (usually below 10 kW) up to systems between 200 kW to 500 kW.

Also, round two of REFIT launched in September 2016 and aimed at implementing 2 GW of renewable energy. It resulted in a substantial increase in the number of projects achieving financial close in comparison with Round 1.

The report explained that although the ambitious target was not achieved, the programme has completed between 1.4 GW and 1.8 GW of additional renewable generation capacity at a competitive tariff of $0.084 per kWh. This was a significant step-down from the tariff of the

Round 1 Programme ($0.1434 per kWh). Benban Solar Park is implemented with this scheme.

Despite tariffs fixed up to 40% lower than round one, the long-expected currency guarantees, and the inclusion of international arbitration terms played a major role to secure financing from multilateral financial agencies and banks, and allowed the success of the second round of Egypt’s REFIT programme.

Also, an independent power producer (IPP) model introduced, lead to the wind and solar projects from 100 MW to 600MW.

The report highlights the Benban Solar Park, under the FIT model, has an estimated investment up to $4bn, and is currently under construction with a planned total capacity of 1.8 GW. Benban will include 41 solar power plants located in the Aswan governorate. Once fully operational, the solar park will cut carbon emissions by two million tons per year.

In May 2019, 19 projects of the Benban Solar Park were reportedly connected to the grid.

plants with a capacity of 1,465 MW were completed and started commercial operation.

Currently, the construction of four additional new solar power plants with a capacity of 200 MW is engaged on the Benban solar park site.

Furthermore, EETC and the International Finance Corporation (IFC) signed in April 2019 an agreement to fund projects selected under the auction system, namely, the West Nile Solar Plant with a capacity of 600 MW.