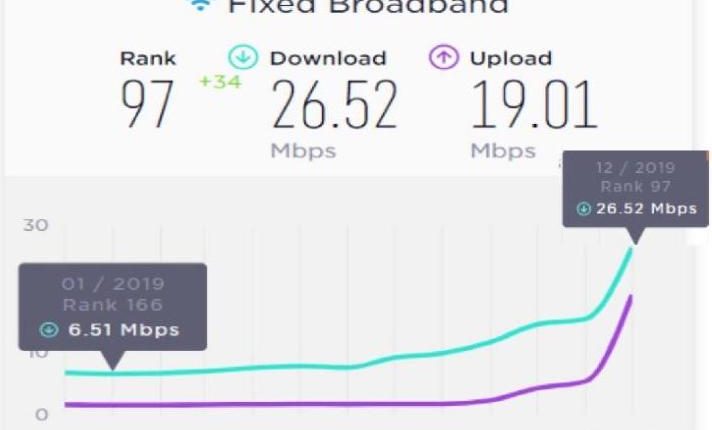 The latest reports issued by the global Ookla Speedtest Index to measure average internet speeds revealed that the average fixed internet download speed in Egypt increased to 26.5 Mbps by the end of 2019 compared to 6.5 Mbps in December 2018.

According to the report, the average internet speeds in Egypt quadrupled during 2019; thus, Egypt is the first in the world in terms of average speed improvement for the fixed internet, up by 400% in 2019. The report also indicated that Egypt advanced 34 ranks compared to November 2019.

It is noteworthy that Telecom Egypt pumped huge investments in information infrastructure worth $1.6bn starting from mid-2018 in order to raise the efficiency of the Internet.

This comes within the framework of implementing the strategy of building a digital Egypt, which is based on digital transformation. An integrated plan of action was implemented for the national development of infrastructure through the development and expansion of the international network, the main network, and messaging networks, as well as the backbone network. The plan also looks to deploy MSAN smart aggregators based on optical fibre cables in parallel with raising the efficiency of the terrestrial network for all users.