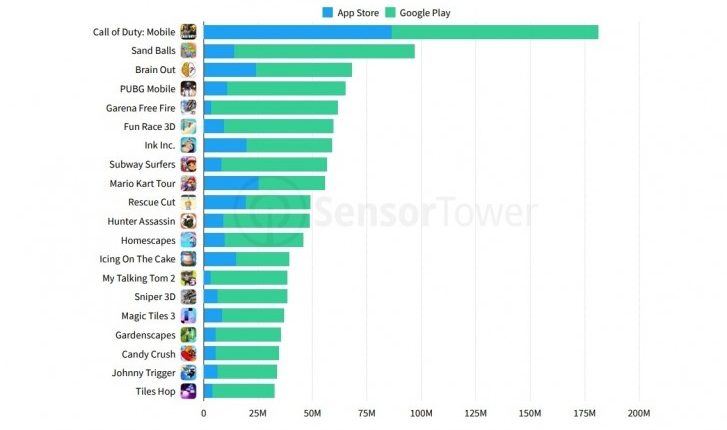 The year of 2019 has been fruitful for app developers and companies according to the latest Sensor Tower report. During the past twelve months, downloads increased by 9.1% to 114.9bn downloads, including 30.6bn in the App Store and 84.3bn from the Google Play store.

WhatsApp, Facebook, Messenger, and Instagram are still among the 5 most downloaded apps, but this time the TikTok app jumped from fourth place in 2018 to second place in 2019 due to its popularity in markets like India, the United States, and Brazil.

The report pays special attention to the fourth quarter of 2019, which is between October and December, during which Call of Duty was the most popular game, with over 180m downloads. Sand Balls ranked second with about 90m downloads.

Looking at downloads from Apple devices, half of Call of Duty’s downloads were from the App Store, with Mario Kart Tour ranking second with only 2m5, less than a third of the newly launched downloads.

Sensor revealed that the biggest surprise was the launch of Disney + on 12 November, which soon rose to ninth place in the fourth quarter of 2019 on the App Store. It was also the best app downloaded in the US in that period as 31m downloads were made, more than twice the total downloads for TikTok, which was second.

TikTok revenue has grown by 540% annually, but most of it comes from China, where the app also makes in-app purchases.

TikTok’s revenue was about $40m by the end of December 2019, putting ByteDance in seventh place for non-games in terms of revenue.