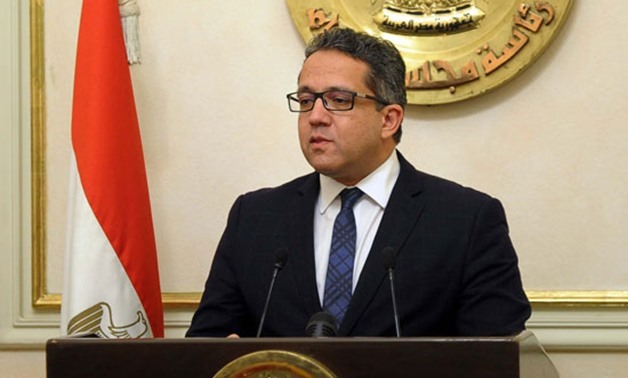 Major tourist openings are expected this year, topped by the Grand Egyptian Museum (GEM), which is scheduled to be inaugurated in the last quarter of 2020.

It was announced before that the inauguration of Baron Empain Palace, Kafr El-Sheikh Museum, and National Museum of Egyptian Civilization to take place in the first half of 2020.

As for Sharm El-Sheikh Museum, the minister revealed it will open on 25 April, marking the Sinai Liberation Day.

The construction works in Sharm El-Sheikh Museum resumed in September 2018, after a pause of eight years due to a finance shortage at the time.

The Ministry implements the project in cooperation with the National Service Projects Organization.

Moreover, Al-Anani said Hurghada Museum’s construction was completed, however, there were some preparations that have yet to be completed for the inauguration.

Al-Anani said it was the first museum to be built in partnership with the private sector, noting that its success will open the door for more cooperation between the public and private sectors in this field.

On a different note, he said tourists in Egypt used to choose between enjoying cultural tourism in Luxor and Aswan, or recreational tourism in the Red sea, but this about to change.

“We prepared a new tourism programme, called “Come to Egypt,” which will include both tourism types. We will link the Red Sea with the Nile Valley through internal flights, so tourists can enjoy both,” the minister announced.

He added that the Minister of Civil Aviation welcomed the idea, and they were studying it.

“We target to activate these internal flights and launch the programme before the ITB Berlin, in order to market and promote it in the exhibition,” the minister noted.

Al-Anani highlighted the importance of showcasing Egypt’s experience in merging the ministries of tourism and antiquities, and the country’s success in linking beaches with cultural tourism.

Regarding the merger of the two ministries, Al- Anani said it would positively affect unifying Egypt’s various types of tourism.

DNE asked Al-Anani if tourism revenue and the number of visitors in 2020 would exceed the numbers of 2010, the peak year for Egyptian tourism. He said that with the stability, security, safety, and the infrastructure’s improvement including tourism services, airlines, and archaeological sites services, he expected Egypt`s tourism sector to achieve very high numbers.

In terms of the promotional and marketing campaigns, the minister stated that before the merger, the ministry of tourism had exerted great efforts in promotional works, which he would continue and build on.

Moreover, Al-Anani declared that Egypt would participate in more than 50 exhibitions in the coming period, starting with FITUR exhibition in Spain, followed by the Belgrade International Fair of Tourism, in which Egypt would be the guest of honour, as well as the ITB Berlin in March.

On a different note, the minister said that 22 mummies and 17 royal coffins will be transferred from the Egyptian Museum in Tahrir to the National Museum of Egyptian Civilization in Fustat.

He added that 22 Pharaonic style gilded chariots were manufactured abroad to transport the mummies from the Egyptian Museum.

He emphasised that the mummies will be transferred after the completion of the development of Tahrir Square, which is neighbouring the Egyptian Museum and Ain Sira Lake, which is close to the National Museum of Egyptian Civilization in Fustat.