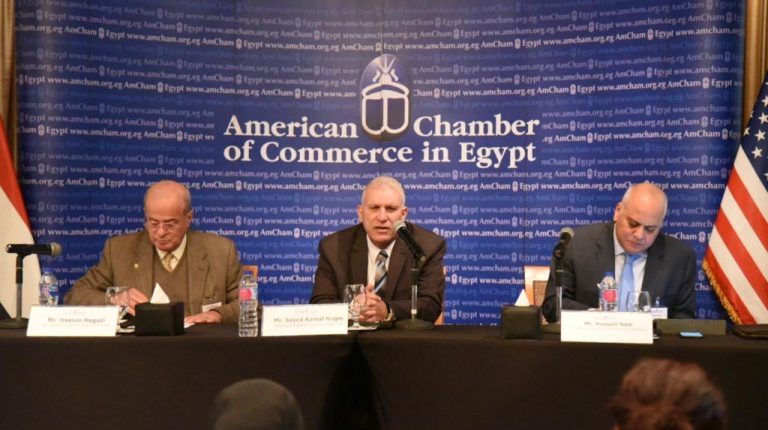 A draft law is almost ready and will be transferred to the general session of the Plan and Budget Committee in the parliament for approval after one more debate session head of the Customs Authority El Sayed Negm said.

In the meeting -moderated by Hassan Hegazy, head of the Customs Tax Committee at the American Chamber of Commerce, and Hossam Nasr, deputy head of the committee- Negm explained that the law combines international standards, World Trade Organisation policy, and the provisions of supervision and collection of public treasury rights.

According to him, the law introduced the principle of customs installment on imported equipment, and machinery for the industry in order to stimulate local manufacturing, in solidarity with the pre-clearance rule of photocopying documents, provided that the original documents are presented when the release is completed. This is a rule that concerned authorities must abide by in accordance to a ministerial decision.

Negm said that the basis of the law assumes that the importer is honourable until proven otherwise. He stressed that the aim of the law is to reduce the number of required documents from 11 to six and extend the release time to three days from the time of examination (to end of June), then reduce costs and prices of imported goods.

To achieve this, Negm said that everyone will abide by the Prime Minister’s decision to set up a unified committee to examine containers and take samples if necessary. If an employee of any party is absent, the agency’s official in the port yard will provide an alternative for them.

In addition, the head of the Customs Authority said that 87 scanning devices have been distributed to customs outlets, with the goal of importing 100 others. About 30 of those have already arrived, and there is a final stage in which 47 devices will be delivered, thereby covering all of Egypt’s customs outlet. This would contribute to saving time and speeding up the process. He noted that all the observations of the World Bank in its “Doing Business” report on the Egyptian Tax Authority were discussed, and action will be taken to address them.

Negm revealed that a contract will be signed with the Italian customs, which is considered the best customs in the world by the World Bank, in order to train employees Egyptian Customs in capacity building. The staff will be trained at any target port to set up a logistic centre before completing its establishment.

Najm said that until now, two logistic centres have been established. One of them is at Cairo Airport and the other is in Port Said Customs. There has been a 65% improvement in performance at the Port Said logic centre, according to people’s testimony to the Minister of Finance during his visits to Port Said a few days ago. The ministry has decided to establish centres in the ports of Sokhna, Damietta, Alexandria, and Safaga until 30 June to cover about 90% of Egypt’s foreign trade. He also explained that export procedures are also simplified, and work is underway to electronically issue shipping permits.

Negm revealed that the Prime Minister has formed a committee that is currently examining the capabilities of all port laboratories and ensure their adequacy, as well as ensure maximum efficiency in their geographical placement.

Currently, there are 75 companies in the white list – also known as the green line – meaning that they are allowed to release goods as soon as they are received. The documents will be reviewed later, and there are rules governing the entry and exit of companies in this list, and there are 52 companies currently applying to enter the list and are waiting for security approval.

Customs can accept a 10% rate variation for any imported commodity between one importer to another. However, it is not possible to accept a difference of up to 90%, which happens sometimes, he said.

Negm stressed that the customs authority focuses more on development goals such as streamlining the export and import process, serving the national industry, and protecting the country from weapons and drugs. He said that the outcome is naturally small due to multiple free trade agreements and custom exemptions for certain imports, such as exemptions made for people with special needs. The authority also plays a major role in collecting value-added tax in favour of taxes, the development fee, as well as 1% commercial and industrial profits in favour of taxes.

He added that the Prime Minister and Minister of Finance give great attention to electronic linking between different tax authorities and departments, as this helps in solving many problems of importers and exporters, and speeding up the business cycle, reducing costs, time, and effort.