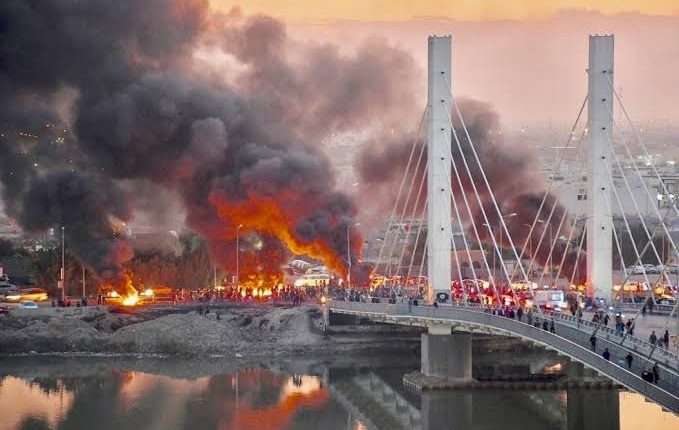 These protests continue through 2020, affecting Egypt’s foreign policy, either directly or indirectly. In this article, Daily News Egypt views those protests, in addition to the impact of US-Iran escalation on the uprisings in Iraq and Lebanon.

The protests in Iraq did not exactly come as a surprise, as in 2018 a wave of protests had also washed over the country. Those protests were sparked when thousands of Iraqis fell ill from drinking contaminated water.

However, the main reasons behind the protesters anger in 2019 were corruption, unemployment, and Iran’s influence. Many of the protesters are educated, and idealistic young people, who are mostly urban and secular. But the largest group are working-class and poor Shiite Muslims, either from the southern part of the country or with origins there.

During the protests, the government was accused of using force against unarmed protesters, as it used bullets, snipers, hot water, hot pepper gas, and tear gas.

The protests stopped on 8 October, and resumed on 25 October.

On 29 November, Prime Minister Adil Abdul-Mahdi announced that he would resign.

On 28 October, a top security authority for Baghdad declared an open-ended curfew on the capital.

On 8 November, Ali al-Sistani, Iraq’s influential Shiite cleric, called on the government to respond to the protesters

On 29 November, the prime minister announced his resignation.

On 24 December, The Council of Representatives passed a series of electoral laws allowing voters to select individuals.

On 26 December, President Barham Salih submitted a letter of resignation

On 29 December, the US hit Kataib Hezbollah bases in Iraq killing 25 members, and injuring 51 others.

On 31 December, Hundreds of pro-Iran protesters demonstrated over the US air in front of the US embassy

During the ongoing demonstrations, many headquarters of political parties were burned down. The protesters had blocked Iraq’s main port Umm Qasr several times. Since the beginning, Iraqi forces used live bullets and tear gas in order to disperse the protesters, killing at least 511 people, while injuring more than 21,000.

However, the killing of Iran’s Revolutionary Guards Quds Force commander Qassem Soleimani in Iraq by US strikes on the third day of the new year forced Iraq to be stuck in the middle of an US-Iran military escalation. The escalation had animated the pro-Iran militias, making domestic reform -the protesters’ main goal- more difficult.

Egypt asked all the parties to stop the mutual violence

The foreign Ministry announced that it follows with great concern the current escalation in the use of military force in Iraq, asking “all parties to refrain from spiraling into a cycle of mutual violence, and to assess the resulting dire consequences.”

The situation is worse in Lebanon

The protests erupted in Lebanon on the night of 17 October. Lebanon’s nationwide protests aimed at forcing a mass resignation of the whole political system in Lebanon.

The revolutionary wave continues to grow, including Lebanese nationals of different religions, sects, and political affiliations taking to the streets to demand for their rights.

The protests were motivated by the repercussions of the economic and monetary crisis in Lebanon, but the crisis is rooted in a structurally flawed economic system, wrong political practices, and corruption embraced by the successive governments for decades.

At the beginning, the protesters were triggered by new proposed taxes, they blocked important streets in Beirut, but later on, the protesters started to demand ending the sectarian rule, calling to establish a technocratic government, and condemning the stagnant economy, unemployment, endemic corruption in the public sector, and the government’s failures to provide basic services such as electricity, water, and sanitation.

On 19 October, the first martyr of the revolution, Hussein Al-Attar, was shot while protesting

On 24 October, President Michel Aoun stated his willingness to hold a dialogue with the protesters

On 29 October, dozens of counter-demonstrators attacked protesters in Beirut, destroying tents, and tearing down banners.

On 11 November, the Lebanese Federation of Syndicates of Bank Employees called for a general strike for its 11,000 members over concerns for safety

On 12 November, the second martyr of the revolution, Alaa Abou Fakher, was shot dead in the coastal town of Khalde, south of Beirut

On 3 December, Protesters gathered across the country in response to businessman Samir Khatib’s nomination as possible new prime minister.

, On 8 December Khatib withdrew as candidate for prime minister

On 19 December, the parliament designated Hassan Diab as the next Prime Minister succeeding Hariri.

On 14 January, mass protests resumed across the country, as protesters, smashed the edifices of banks in Beirut.

The protests toppled the government of Hariri, with protesters refusing to leave the streets before seeing concrete measures such as the formation of a new government.

To make the situation even more complicated, the Lebanese political system is confessional, as the elected Members of Parliament and government positions allocated based on religious sect. While the President must be a Maronite Christian, only a Sunni Muslim can take the position of the Prime Minister, and the Speaker of Parliament is a Shiite.

With the resignation of the former prime minister, Lebanon will see a new government soon. However, that government is expected to be handpicked by Hezbollah and its allies.

Despite the economic collapse and contraction, the current escalations with US will likely lead the new government to focus on the security of the country’s institutions and supporting Iran.

The mass-protests which swept Algerian streets on 3 January 2020, indicates that the county is still suffering.

The protesters demanded the release of detained activists, protest against the government’s control over associations and media, and calling for change in the political system. The protests were peaceful and led the military to insist on Bouteflika’s immediate resignation.

Leaving the new elected President Abdelmadjid Tebboune with only two choices in order to diminish the protest movement. The two choices are either to respond positively to the demands or by cracking down hard and deal with the resulting risks and consequences.

On 22 February, about 800,000 protested against the government, after president Abdelaziz Bouteflika announced his candidacy for a fifth presidential term.

On 2 April, Bouteflika announced his resignation

On 4 May, a significant number of power-brokers close to the deposed administration, including the former president’s younger brother Saïd, had been arrested,

On 12 December, the presidential election was held, despite wide popular opposition.

On 2 January, the new president Abdelmadjid Tebboune realsed 76 detained activists, stating that he hopes to launch a serious dialogue with the protesters

Tebboune had also appointed Abdelaziz Djerad as prime minister and the rest of his cabinet mostly consisting of ministers of the previous government.

Without any change in the governmental figures, the new cabinet nominated a third of the ministers from previous governments, including the prime minister and key cabinet posts. The protest movement rejects dialogue without more gestures from the government.

Whether the protest movement can placate by reforming the constitution and election law is yet to be known. The new government should also relax the grip on civil and political activities, and expanding job creation to address a young population’s dissatisfaction as well.

On the other hand, Algeria’s economy needs urgent attention as growth has stagnated due to declining investment, in addition to the fact that budget deficits and inflation are rising.

The new year will show whether technocrats brought into the new cabinet have the vision and political backing to finally start serious liberalisation of an economy long dominated by the state’s energy industry -which already needs massive new investment.

The unrest in Sudan can be traced back to December 2018, when then president Omar al-Bashir’s government imposed emergency austerity measures to try to stave off economic collapse.

Cuts to bread and fuel subsidies sparked demonstrations in the east over living standards, but the anger spread to the capital, Khartoum, demanding for the removal Bashir, who had been in charge for 30 years.

On 19 December, street protests started in Sudan over tripling the price of bread

On 22 February, Bashir declared a yearlong national state of emergency

On 6 April, the movement reached a climax, when demonstrators occupied the square in front of the military’s headquarters.

On 11 April, al-Bashir was ousted from presidency and placed under house arrest by the military.

Between mid-April and June, the Transitional Military Council started negotiations with protesters who demanded civilian rule.

Between 3 and 11 June, remarked the “Khartoum massacre,” when Sudanese armed forces storming a camp in addition to medical facilities and opening fire on protesters,

On 4 August, the different parties signed the Draft Constitutional Declaration which defines a Sovereignty Council of five civilians, five military, and a civilian to lead the council. In the end, it was a military figure that was elected.

The protests resume in 2020

On 2 January, 2,000 women marched to Prime Minister Abdalla Hamdok’s office and submitted a petition signed by 46 citizen’s groups and 13 political parties complaining that the  list of nominees for state governors, is a men-only list and calling for laws against female genital mutilation and child marriage.

Egypt supports the people’s will