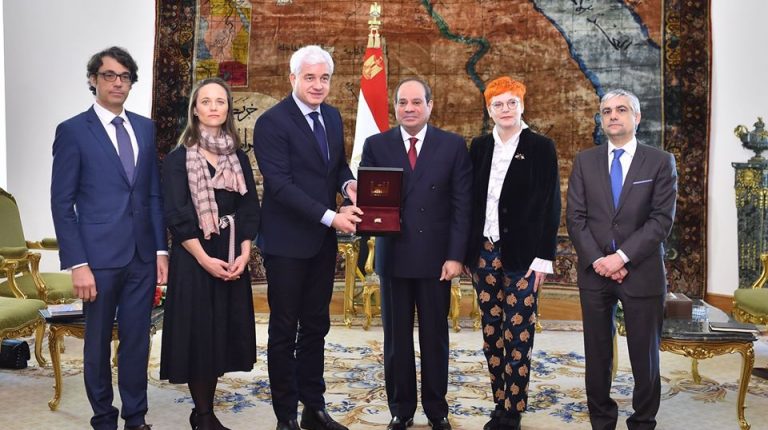 Hans-Joachim Frey, the founder and the first Chairman of the Semper Opernball in Dresden handed the medal to Al-Sisi, pointing out that this medal came as an appreciation  for the president’s efforts in various fields especially in terms of restoring security and stability to Egypt, in addition to the important role Egypt played in Africa’s current development.

The German delegation had also hailed Egypt’s efforts in order to combat illegal immigration, which positively affected the security and stability of Europe, as well as efforts made by Egypt in spreading the values of acceptance, peaceful coexistence, and tolerance.

Earlier, the union organising the Semper Opera Ball, the largest classical entertainment event in German-speaking Europe, praised Al-Sisi’s endeavours to build bridges for peace in the crisis-hit North African region, eulogising him as “a statesman holding the torch of hope and encouraging an entire continent.”

The medal symbolises the victory of good over evil, depicting St. George killing a dragon.

Frey also expressed the aspiration to enhance cooperation with Egypt by extending cultural connections and establishing a number of joint activities in this regard, in addition to cooperating with Egypt’s new cultural institutions, including the Grand Egyptian Museum and the new opera house in the new capital’s Arts and Culture City.

Moreover, Al-Sisi welcomed the German delegation, expressing his appreciation for choosing him to receive the Medal. He also asserted that the award reflects the stability Egypt has recently achieved in various fields, especially in art and culture.

Al-Sisi also affirmed Egypt’s keenness in extending cooperation with Germany through Egyptian cultural institutions constructed at the highest technical and technological level, which will be opened in 2020, in the New Administrative Capital and the New Alamein city.