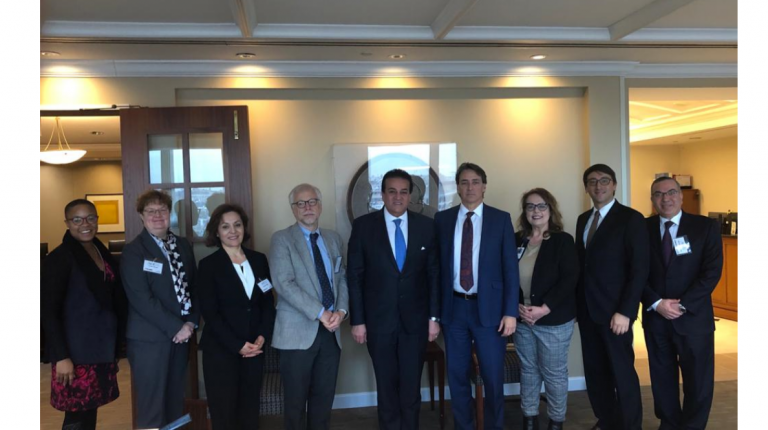 Minister of Higher Education and Scientific Research Khaled Abdel Ghaffar is in the United States to discuss boosting academic cooperation with US institutions, according to a ministerial statement on Saturday.

Egypt pays remarkable attention to enhancing the higher education and scientific research system which has witnessed positive developments, Abdel Ghaffar said, noting that his ministry is keen on students’ exchange with US institutions.

Abdel Ghaffar also met with representatives from the Association of American Medical Colleges (AAMC) and the American Dental Education Association (ADEA) in Washington DC where he discussed activating joint cooperation frameworks for training Egyptian doctors and dentists in the US in addition to developing Egypt’s study programmes.

At the Egyptian embassy in US, Abdel Ghaffar met with 30 American professors and researchers with Egyptian roots and representatives from both the World Bank (WB) and the International Monetary Fund (IMF), in addition to senior US officials. He asserted that Egypt intends to invest heavily in the education sector.

Notably, the United States Agency for International Development (USAID) launched its Higher Education Initiative (HEI) in Egypt to provide scholarships to hundreds of talented women and men from underserved communities throughout Egypt to study at premier Egyptian and American universities in fields crucial to Egypt’s sustained economic growth and development

Through the US-Egypt Science and Technology Joint Fund, USAID is building the capacity of Egyptian science and technology institutions, including universities and institutes of higher education, to address development challenges and promote economic growth through applied scientific research and technology commercialisation, according to USAID’s website.