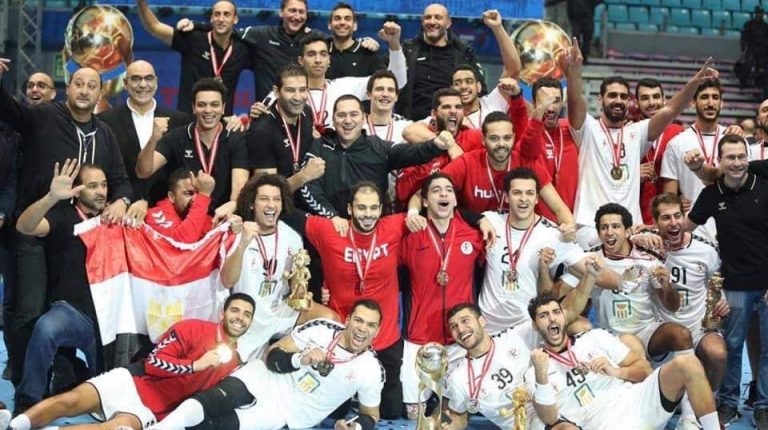 Egyptian handball team presented their best performance in the 2020 African Men’s Handball Championship in Tunisia and won their seventh title against the hosts on Sunday. The final game ended 27-22 for Egypt, giving the Pharaohs the prestigious title and a qualification card for the 2020 Olympic Games in Tokyo.

This achievement was the result of persistence and determination of the team from the very beginning. Moreover, the state, represented by Minister of Youth and Sports Ashraf Sobhy, stood behind different handball national teams, which led the Pharaohs to win the bronze medal in Men’s Junior World Handball Championship and the gold medal in Men’s U-19 World Handball Championship last year.

The Sports Minister’s support wasn’t all just funding, but he was also there to make sure that the team was set up right. He did not hesitate one moment for approving the Egyptian Handball Federation’s request to hire Spanish coach Roberto García Parrondo. The coach was able leave his mark on the team and lead the Pharaohs through the African Championships and straight to the title.

Moamen Safa, the Egyptian Handball Federation’s treasurer and supervisor of the national teams and head of the current mission in Tunisia, expressed his great happiness for winning the African championship and qualifying for the Olympic Games, stressing that Egypt won one of the most difficult championships outside home.

The path of the Pharaohs in the tournament was great. They won the three matches of their group stage against Guinea, Kenya, and DR Congo, before qualifying to quarter-finals where they beat Gabon 36-17, and Angola 33-26. In the semi-finals, Egypt defeated Algeria 30-27.

Safa praised the great effort made by all players without exception, noting that everyone contributed to achieving the goal through commitment and discipline.

Ahmed Al-Ahmar, the star of the national handball team, wrote his name in letters of gold in the history of Egyptian sport, after he participated in crowning the Pharaohs with the African title for the seventh time in history, and he also contributed to achieving many achievements and titles.

Al-Ahmar led the national team to achieve more than one title over last years and also participated in many international and international championships.