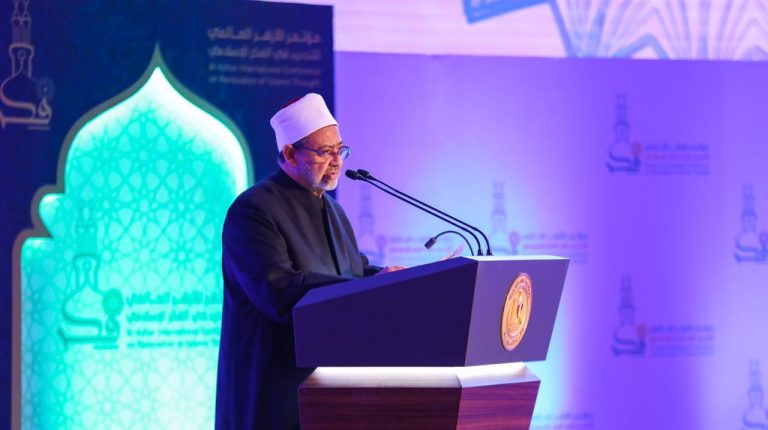 President Abdel Fattah Al-Sisi said the renewal of religious discourse does not mean changing the principles of religion, stressing that there is no Muslim who believes in God that would allow major sins or the enactment of any new legislation that opposes Islamic law “Sharia”.

In his speech at the Al-Azhar International Conference for the Renewal in Islamic Thought on Monday, which Prime Minister Mostafa Madbouly read on his behalf, Al-Sisi added that renewal must be in the jurisprudence of transactions and areas of working life.

Under the patronage of President Al-Sisi, the activities of the Al-Azhar conference, entitled “The International Al-Azhar Conference for Renewal in Islamic Thought,” will commence Monday and Tuesday, with the participation of a group of prominent leaders and prominent political and religious figures of the world, and representative of the Ministers of Endowments, Egypt’s Dar Al Ifta, and Islamic councils from 46 countries across the world.

Madbouly expressed his hope for the conference’s success in achieving its goals. “I hope that the conference ends with practical solutions to various issues and problems that Muslims are divided on.”

Grand Imam of Al-Azhar Sheikh Ahmed Al-Tayeb said he wants to confirm the provisions of Islam have unchanging and non-renewable constants.

In his speech, Al-Tayeb said: “It has been proven that these provisions are protected by the law of development, that they are applicable at all times anywhere, most of which are within the doctrines and creeds and ethics of the state, and few of them relate to all families and other narrow fields.”

He further explained: “A Muslim prays in the age of space just as he used to pray in the era of desert and camels. There is no difference. The same way that they must fast and do the pilgrimage. All of this is the fundamentals of the nation’s consensus.”

He added: “All these efforts are not a strange matter on the land of ancient civilizations, Egypt,” conveying the greetings of the Custodian of the Two Holy Mosques, King Salman bin Abdul Aziz and the Saudi Crown Prince Muhammad bin Salman, to all the attendees at the conference, and their hopes that God will preserve Egypt’s security and stability.

On behalf of the president, Madbouly has honoured a number of innovations in Islamic thought.

The opening was attended by Parliament Speaker Ali Abdel Aal, Secretary-General of the Arab League Ahmed Abo El-Gheit, and former President of the Supreme Constitutional Court of Egypt Adly Mansour, President Advisor Ibrahim Mahlab, and other officials representing many Arab and Islamic countries.