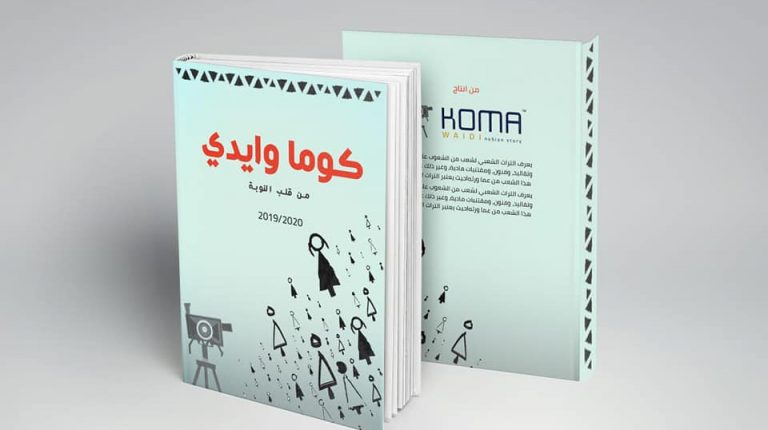 While a young big city woman was working on a documentary about her Nubian heritage, social activist Hafsa Amberkab was shocked at the fact that she didn’t understand the meaning of dozens of Nubian words spoken by natives. Despite her parents’ constant efforts in communicating with the language at home, it didn’t prevent Amberkab’s lack of knowledge of her hometown language, as a young woman who opened her eyes away from the land of beauty. She is one of many Nubians that left their hometowns years ago, but still holding closely their love for their motherland. Because of this, Amberkab felt the urge to change her situation, and dedicated her time into making the first Nubian language dictionary, to give both Nubians and foreigners a better understanding of the ancient tongue.

With the aim of reviving the almost demolished Nubian language, Amberkab started the “Koma Waidi.”

“Koma Waidi”, which is Nubian for Tales of the Past, is an individual initiative seeking to document Nubian vocabulary digitally and on paper. The campaign seeks raising people’s awareness of the language, which is only spoken in a very small and specific area in Egypt. The campaign is meant to open an access gate for Nubians living away from their hometown to reconnect to their culture.

“Even though my parents left Nubia years ago, they always paid attention that we communicate through our language at home, in order not to forget it; yet that did not prevent me from finding myself not recognising the meaning of dozens of words spoken by natives when I was filming my documentary last year,” Amberkab told Daily News Egypt.

She explained that through time, Nubians tended to Arabise the words, and replace most of them, “which ended up with having sentences that are half Nubian and half Arabic. But I never really recognised this, until the moment I personally communicated with natives.”

Thousands of Nubians were displaced from their hometown villages due to the building of the High Dam in 1960, which was officially inaugurated in 1971, as well as the Aswan reservoir. For them, there is only one official language, the Nubian one, and as a foreign language dealing with Arabic in their way of fitting in society.

About two-thirds of the Nubian Valley is now under Nasser Lake. The most famous of the monuments affected by the Aswan High Dam was the temple complex on the island of Philae.

The self-funded initiative publishes a booklet with over 200 Nubian words that are translated in Arabic, English, and Spanish, as well as a number of videos of native Nubian speakers.

When she first started the initiative, Amberkab never imagined the large number of young generations that knew very limited Nubian words, and were looking for a way to learn it.

“Even those who still reside in Nubia and speak the language fluently told me that there were ancient words in the dictionary they did not know about,” she said.

For four months, Amberkab went through the documentation journey of Nubian words, through the videos she captured of people speaking randomly.

“I wanted people to speak about all life aspects, in order to have all possible words in each field. These videos were published in a set of online broadcasts for people to learn the pronunciation and all about the Nubian language,” she explained.

“When my parents funding the dictionary printing, we weren’t looking for any financial benefit. However, based on peoples’ requests, we decided to sell it for a price that only covers its costs,” said she. The booklet is being sold for EGP 40.

The booklet is the first of a series of books. Amberkab plans to dedicate each part of the series to a certain topic.

“The book series is the first of my plan to have the biggest digital and printed library all about Nubian culture, where people get to explore the far away and shed light heritage,” she added.