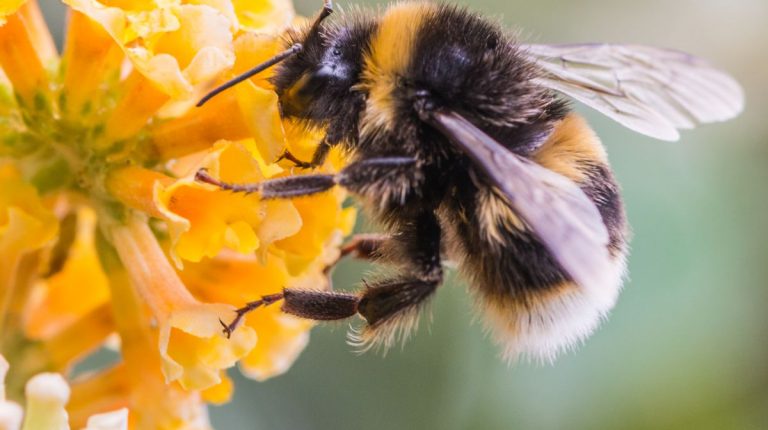 Solitary female bees inspect other nests for signs of danger before making decisions on where to build their own, a new London-based study suggests.

The study, led by researchers at Queen Mary University of London, found the clever bees looked for signs of parasite infection in other species’ nests. Based on this technique, bees search for safe places where they can bring up their own brood.

The research team set up artificial nests in parks and grasslands across South East England and London from 2016-2018 to study the behaviours of different species of solitary cavity-nesting mason bees.

The scientists also tested the ability for these species to notice other cues of parasite infection in the surrounding environment.

They showed that solitary bees were surprisingly intelligent in their observations and were able to remember geometric symbols found next to parasitised nests, and avoid nests near these symbols in future breeding periods.

Olli Loukola, lead author and postdoctoral fellow at Queen Mary University of London and the University of Oulu, said: “It’s amazing that solitary bees are able to use such a complex strategy in their nest-site decisions. It really requires a sophisticated cognitive flexibility and it is fascinating to uncover how much genius is found in these small-brained solitary bees.”

“Despite being solitary, these bees live in communities and can learn from each other. As environmental factors such as nesting suitability, predation, and parasitism change both spatially and over time, it makes sense for bees to glean information from their neighbours, even if they aren’t the same species.”

Most research to-date has focused on social species, which live in communities led by a queen with several dozen to several thousand workers. However, most wild species are in fact solitary and individuals build their own nest rather than living in a hive as part of a larger community.

Whilst these bees live independently, they often exist in in groups with multiple different species residing in close proximity to each other.

Lars Chittka, Professor of Sensory and Behavioural Ecology at Queen Mary University of London, said: “There are around 20,000 solitary bee species in total and about 150 live right here in London. In these species, female individuals, or ‘single mothers’ build their own nests. The male bees never do any work.”

“Our research suggests that despite the fact that these females largely work alone, they’re able to use cues in their environment and activities of other animals in their surroundings, to successfully protect their broods.”

With reported declines in bee numbers over the last few years, studies that improve our understanding of their behaviour and the environmental pressures they face are important for future conservation efforts to save these pollinators.

‘We cannot survive without insects’

Tiny bees buzz to the rescue as elephants wreak havoc