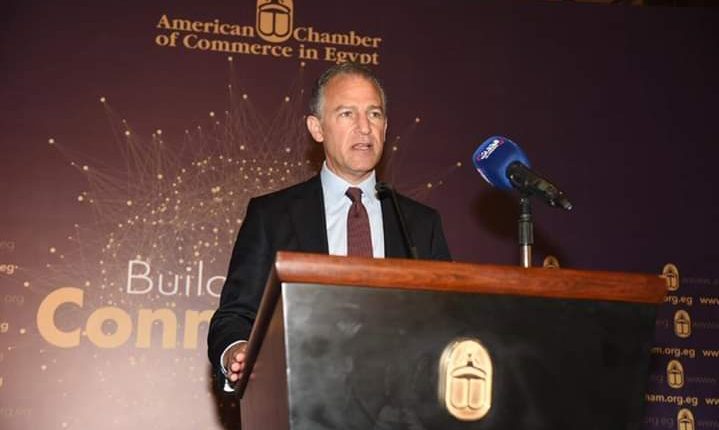 The United States’ government provides robust support for Egypt, both bilaterally and through multilateral institutions, having invested over $80 bn in Egypt over the 40 years of the strategic partnership, US ambassador to Egypt Jonathan Cohen said during his speech at the event  organised entitled “The US-Egyptian strategic partnership and opportunities for commercial engagement,” organised by the American Chamber of Commerce (AmCham) on Tuesday.

“My entire career has been about forging US partnerships with countries and regions to expand mutually beneficial opportunities, including with and for US business.  I previously worked on economic and commercial files in a number of Mediterranean countries, including Greece, Cyprus, Israel, and Turkey, and gained in-depth understandings of how to realise opportunities and overcome challenges to boost trade, investment, and development,” the ambassador said.

Playing a pivotal role in the development of Egypt’s energy sector, the ambassador said “In both Cyprus and Greece, I worked with Exxon and am delighted to report the signing just yesterday of a new contract to explore offshore here in Egypt.”

Egypt is a dynamic country with a complex economy and unique regional challenges, the ambassador said, noting, “I’ve been working hard over the past few months to understand the specific challenges our US companies face here. And I’m still learning.  But with your help I hope to be an expert advocate for your interests – because the success of US businesses in Egypt is in America’s best interests.”

Cohen presented his credentials at the Ministry of Foreign Affairs on 17 November 2019 after he was sworn in as ambassador to Egypt on 14 November 2019.

“As the US Ambassador, I am responsible for the US-Egypt relationship in all its aspects.  Political, military, economic, trade, cultural, educational – it all comes across my desk,” the ambassador stated, asserting that the first and most important point is he is, and will be, American businesses’ advocate in Egypt.

“I will be working tirelessly to create and expand business opportunities between the US and Egypt, and working with the Egyptian government to build an environment that attracts US investment and in which a strong private sector can generate jobs and deliver the economic growth that Egypt needs,” the ambassador said.

He asserted the importance of American brands in terms of quality products and services that American companies bring to the local market, jobs they create, innovation and entrepreneurship they inculcate, knowledge and technology they transfer, and corporate-social responsibility projects they undertake.

From 2017 through this past November, total US-Egyptian bilateral trade grew by over 44% to $8.2bn, the ambassador said, adding that US goods exports to Egypt were $5.2bn, up 30% over the past two years.

“Our military and security assistance to Egypt also remains a lasting testament to Egypt’s historic peace treaty with Israel 41 years ago and totals over $50 bn over that time span,” the ambassador said.

He added that energy is one of the most promising sectors, not just in Egypt, but across the Eastern Mediterranean region, and that “The recent announcement by Egypt and Israel of gas deliveries via the East Mediterranean Gas pipeline is historic – congratulations to Noble Energy for their part in this success story.”

ExxonMobil and Chevron are entering Egypt’s dynamic upstream market, the ambassador said, noting that the Apache Corporation remains one of the largest investors in the country.

Information and communications technology (ICT) is a very promising area in Egypt, bursting with entrepreneurial spirit. The most recent ICT exhibition attracted over 20 major US vendors, who see great opportunities in helping Egypt build out a 21st century communications infrastructure.

In the past two years, IBM, Microsoft, Uber, Cisco, and Honeywell have all expanded their footprint in Egypt, the ambassador mentioned, saying Google has returned to Egypt based on positive growth prospects in the market.

US pharmaceutical companies and medical equipment providers have long played an important role in Egypt, partnering with the Egyptian government to keep Egyptian citizens healthy, the ambassador said, noting, “it was a US-Egypt joint venture that mobilised the public and private sector and with the support of the World Bank tested 70 million Egyptians in seven years to wipe out Hepatitis C in Egypt.”

There are opportunities for US companies, in Egypt’s plans, to digitise medical records and upgrade its national health insurance plan, the ambassador mentioned.

The Qualified Industrial Zone (QIZ), which allows for duty-free imports to the US of Egyptian products with 10.5% Israeli input, continues to expand Egypt’s textile exports to the US, which is now worth nearly $1bn each year and supporting tens of thousands of jobs in both US and Egypt,  the ambassador said.

QIZ is not limited to textiles and the embassy is encouraging Egyptian companies to look for other opportunities to expand the use of this facility to other products, the ambassador said.

Agriculture accounted for nearly 60% of US-Egypt bilateral trade last year, the ambassador said, adding, “US companies are well-aware of the many opportunities across Egypt’s agricultural sector, including food and beverages, feedstock, and so much more.”

Many US agribusiness associations are already active in Egypt and work closely with local firms on best practices.

The USAID is working with universities and technical high schools to promote entrepreneurship programmes that will help the next generation of entrepreneurs enter the market, that ambassador said.

Additionally, the ambassador told Daily News Egypt on the sidelines of the event that several US companies are interested in putting new investments in the local market.

He concluded that the US supports Egypt, Ethiopia, and Sudan in reaching an agreement on the Grand Ethiopian Renaissance Dam, and will continue to.