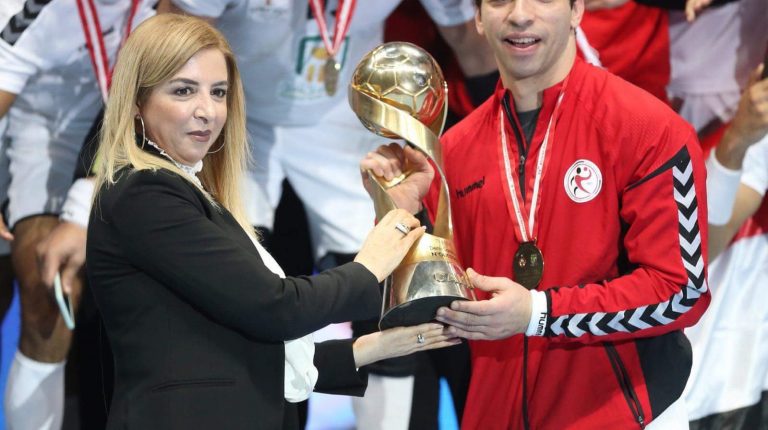 After his great contribution to Egypt’s winning their 7th African Men’s Handball Championship and reaping several individual awards in the tournament, Daily News Egypt interviewed Ahmed Al-Ahmar, the star of the Egyptian handball team, to tell us about his handball journey and inspirations in the coming period.

Al-Ahmar said the team prepared well for the African tournament three months prior. They held closed training camps abroad, the last of which was in Sweden, and played strong friendlies.

Al-Ahmar pointed out that the camps extended for long periods, and the team included players with great experience, as well as young players who participated in Men’s U-19 World Handball Championship last year and played big role in winning the world title, including Hassan Walid of Zamalek. There was a plan to mix experienced with young players, and it proceeded very well, he added.

He praised Minister of Youth and Sports Ashraf Sobhy and Head of the Egyptian Handball Federation Hisham Nasr for their support of the team in Tunisia. The presence of Egyptian sports officials in Tunisia had a positive impact on the players, as it conveyed a message of support from home, especially with the presence of Sobhy, he added.

Everyone was confident of winning the title for the seventh time, he stressed.

Al-Ahmar said they had expected the Tunisian fans would lose their temper in the final match. Some Tunisian fan allegedly throw empty plastic bottles at the Egyptian players but fortunately there were heavy security presence in the stadium, he added.

Notably, the prestigious African title gave Pharaohs a qualification card for the 2020 Olympic Games in Tokyo.

Al-Ahmar denied that the players sought to beat Tunisia to avenge their previous defeat in the last championship in Gabon. He stressed that they only wanted to win the title and qualify to the Olympic Games, regardless of their opponents.

As for reports about his retirement, he said he would do so when he fails to provide more, ruling out to retire soon.

DNE asked Al-Ahmar how he saw some fans likening him to Liverpool star Mohamed Salah. He said he was happy to be compared to him despite not gaining the same fame.

Al-Ahmar finally expressed his wish to win an Olympic medal despite the difficulty of the competition, pledging to do his best.