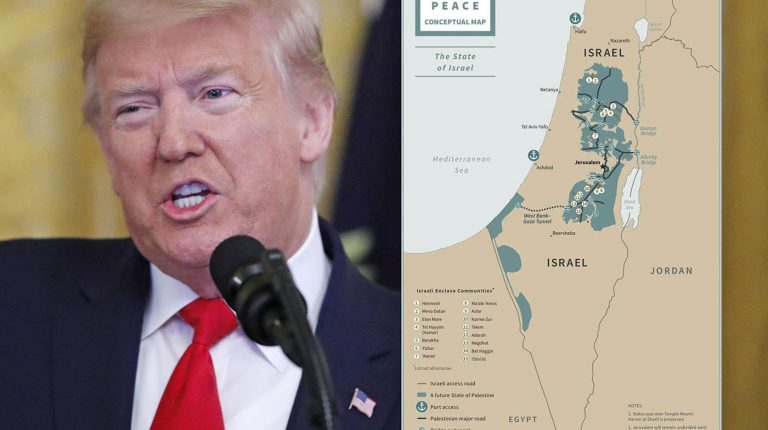 Palestinian President Mahmoud Abbas confirmed his rejection of the peace plan announced by US President Donald Trump, saying that “the deal is a conspiracy, it will not pass” during a press conference held in Ramallah on Tuesday.

He stressed adherence to the state of Palestine and its capital, Jerusalem, in response to the Trump’s peace plan, in which he considered the city “an indivisible capital of Israel.”

Abbas said that “plans to liquidate the Palestinian case are going to fail and disappear”, and stressed that the priority at the present moment is for “the fronts of the resistance,” saying, “Jerusalem is not for sale, and the Palestinian people will reject” the plan.

He added that the peace plan did not differ from the Balfour Declaration, explaining that what happened by Trump was a return to 1917.

“This is the deal that is based on the Balfour Declaration made by America and Balfour,” he said.

“Therefore, America is implementing what it set earlier,” according to Abbas, who said that the Palestinians were right when they rejected the plan at the beginning.

Abbas further expressed his refusal of Washington being the sole mediator of the peace process, and that should be the international Quartet and major countries in negotiations over the issue, on the basis of international legitimacy and Security Council resolutions.

Abbas called on Arab foreign ministers to meet on Saturday to deliver what the Palestinian Authority (PA) hopes will be a firm rejection of the peace proposal.

Abbas has always rejected the proposal, as he has repeatedly said the US plan is less about peace than it is about eliminating Palestinian rights.

Earlier in the week, Abbas refused to take a call from Trump. And on Tuesday, just before Trump made his deal public, Abbas went way beyond the borders of diplomacy, calling Trump a “dog and the son of a dog”.

Trump proposed on Tuesday, what he described as a “realistic two-state solution” to the Palestinian-Israeli conflict, requiring the establishment of a Palestinian state “that explicitly rejects terrorism” and makes Jerusalem “an indivisible capital of Israel.”

“My vision offers a win-win opportunity, a realistic two-state solution that addresses the dangers posed by the Palestinian state to Israel’s security,” Trump said.

The plan was warmly welcomed by Israel’s prime minister, who called it a “historic day” for the Jewish state.

He said that the future Palestinian state “will not be established unless according to several conditions,” including “an explicit rejection of terrorism.” There could only be “a Palestinian capital in East Jerusalem.”

“The establishment of a Palestinian state depends on Palestinian respect for human rights, freedom of the press, and the existence of an impartial and reliable judiciary.”

Trump’s plan also calls for Palestinian refugees to be able to return to a future Palestinian state and create a “generous compensation fund.”

Trump revealed his so-called “Deal of the Century” peace plan on Tuesday, claiming that it is the most detailed proposal that has been put out so far, as it provided precise technical solutions.

In short, the plan stipulates a two-state solution, but recognises Jerusalem as Israel’s capital, gives parts of West Bank to Israel, enforces the disarmament of Hamas, the demilitarisation of Gaza, and ends the right of return for Palestinian refugees.

This was the first time that Israel authorised the release of a conceptual map for a peace plan, Trump said, adding: “today could be the last opportunity Palestinians will ever have to establish a state.”

According to the plan, the US recognises Israeli settlements in the occupied West Bank, issuing a map of demarcated borders for a “realistic two-state solution that provides a viable path for the Palestinian state”.

The plan states a demilitarised Palestinian state living in peace alongside Israel, but under strict conditions the Palestinians are likely to reject, while Israel agreed to “freeze the land” for a period of four years to ensure that a two-state solution is possible.

The plan also states that maintaining the status quo in Haram al-Sharif in Jerusalem, located in the eastern part of the city which Israel occupied in the 1967 war, meaning that Israel will “continue to protect” the holy places in Jerusalem and ensure freedom of worship for Jews, Christians, Muslims, and other religions.

As for the economic aspect of the plan, it included the establishment of an investment fund worth $50bn to support the Palestinian economy and the economy of neighbouring Arab countries. The plan included “linking the proposed Palestinian state with roads, bridges, and tunnels in order to link Gaza and the West Bank.”

“We reject this deal. We won’t accept any substitute for Jerusalem as the capital of the Palestinian state,” senior Hamas official Khalil al-Hayya told AFP.

King Salman stressed in a telephone conversation with Palestinian President Mahmoud Abbas that the position of Saudi Arabia will not change over the Palestinian issue, after the American President revealed the terms of the so-called “deal of the century.”

Assistant commander of the Iranian Revolutionary Guard, Yadallah Jawani, said that the deal of the century will be the beginning of a new chapter in the framework of Palestinian resistance.

“When we look at the content of this plan, we realise that it is a one-sided plan that does not include another party that makes it yield specific results. In fact, Trump and his plan revealed the defeat of the biggest betrayal deal of the century … The century deal is another strategic mistake that is still committed by the idiot Trump. “