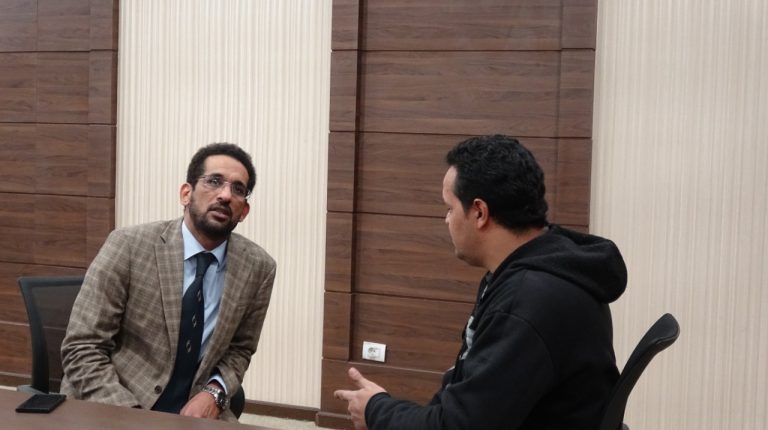 The 2020 Cairo International Book Fair is the oldest and largest in the Arab world, and takes place in the last week of every January, and this year it’s bigger and better than ever. The fair will welcome thousands of people from around the country and around the world looking to check out old and new titles. Daily News Egypt sat down with Shawkat Al-Masry, Executive Director of the CIBF, to get more information of this year’s festivities.

What are new book fair activities this year?

The Book Authority has prepared a diversified and distinguished programme for the fair’s pioneers. In the 51st session of the CIBF, it focused on artistic activity, in cooperation with Egyptian Opera and Folklore.

About 12 movie stars will be participating in the fair, most prominently, Yousra, Khaled El Nabawy, Ahmed Ezz, and Samiha Ayoub, in addition to leading writers, including Bashir Al Deek, and Abdel Rahim Kamal.

A hall will be dedicated to playing new films on a daily basis, including the Blue Elephant and many other award-winning ones.

Who are other superstars in this year’s fair?

The granddaughter of Nelson Mandela, Saudi thinker and novelist Turki Al-Hamad, and Rasha Kelej, and CEO of Merck International Charity Foundation, who was chosen among the list of the most influential figures in Africa in 2019, and archaeologist Zahi Hawwas, and others. Many seminars will be held by scholars like Dr. Magdy Ashour.

What are the most important initiatives adopted by this year’s book fair?

The 51st session of the CIBF will present 12 initiatives, in addition to “Fair Ambassadors”, including the Future Initiative by Dr. Ahmed Al-Sharif, Secretary of the Leaders Foundation, which aims to prepare and train young people for leadership and business management through six free training programmes. About 4,000 young men and women applied to it, and only 600 will be selected in cooperation with the Faculty of Higher African Studies at Cairo University for a period of six days in the second week of the fair.

Why were committees restructured at this year’s fair?

The fair committees were restructured in terms of philosophy and number, because the last golden jubilee session was exceptional in terms of the budget and the size of hosting from outside Egypt, as well as the number of its committees, which amounted to seven. During the current session, things returned to normal, so the number of committee members decreased to a third and we have one cultural committee divided into three main axes: intellectual, artistic, and children. The number of cultural and artistic activities is more than 850 activities so far.

Yes, the number of events is big, and in the upcoming fair we will try to reduce the number.

What about the publishing plan that comes with the fair every year?

Chairman of the Book Authority Haitham Al-Hag Ali, adopted a plan for publishing mechanisms according to a specific schedule, so that the Book Authority launches new works throughout the year and not only at the time of the fair, which removes publishing pressure and makes readers aware of new works. Some of the most prominent works include “Ro’ya” series, in addition to six books about geographic scientist Gamal Hemdan, in cooperation with Dar El Helal and Dar El Ma’aref, in addition to a book that brings together 34 geographic scientists, including seven from Arab countries. There are also geographic comics for children.

Why has the price of tickets increased? and does it affect the number of visitors?

This is a natural increase. There are also preparations for family tickets through “Fawry” services, and there are free passes given to students of universities, schools, institutions, and we print about a quarter of a million free permanent invitations. Also, in cooperation with the Public Transport Authority, nine lines will be provided for buses of the Transport Authority to transport the visitors of the fair. Communication is also taking place with a private transport companies to transport the public from anywhere within Cairo for EGP 5 through using the fair’s code.

What about the size of participation of Azbakeya Wall in the fair?

Some 45 libraries of the Azbakeya Wall are participating in the fair’s booths, and this is a reasonable size, according to the booklet of conditions announced by the Book Authority. One of its top priorities is displaying used books in order to preserve the copyrights, in cooperation with the Egyptian and Arab Publishers Union.

What were the most important of those conditions?

Not displaying books published since 2018, in order to preserve the rights of authors.

In addition to books available in all fair booths, there are a number of activities in building Plaza 2, most prominently “Child Activity” which will have a central place in Hall 4 with the children pavilion. Two side areas were allocated in Hall 1 so that children and their families do not accumulate in one hall. The pavilion includes a corner for artistic workshops, aiming to build the skills of children through various artistic workshops, including drawing and colouring on porcelain, recycling environmental waste, drawing African masks, murals and pharaonic letters, and creating various puppets.

Why did you choose Senegal as the guest of honour?

The State of Senegal programme as the guest of honour  includes the session of “Sheikh Anta Diop, the icon of Africa”, in which Dr. Babakar Nadak Mabay speaks. There is also the “Leopold Cedar Senjour and black poetry” session, in which Rafael Nadiaye speaks, as well as a session for Senegalese literature in French, in addition to several other sessions on Senegalese literature and children’s novels and stories.

The death of young writer Mohamed Khalifa has raised many questions on the ambulances in the fair. What do you say about that?

An ambulance unit is already present in the fair, and the young writer Mohamed Khalifa was transferred immediately to a hospital, but he passed away shortly as a result of cardiac arrest.

As I said, the fair has two ambulance units, a rapid alert unit, breast diseases detection, and other major equipment that helps facilitate matters for visitors of the fair.