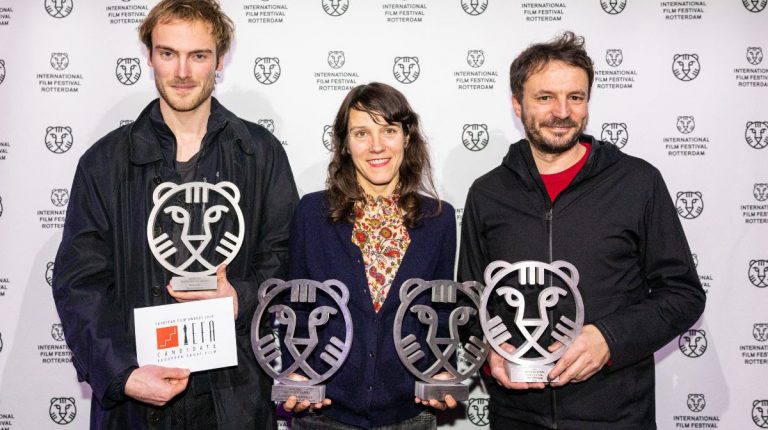 The jury gave a special mention to Wong Ping’s Fables 2 by Wong Ping. They said, “This admirable work, whose sharp political satire and madcap animation started so memorably last year in the award-winning first part of the series, continues to keep a finger on the pulse of society.”

The jury on Apparition said that “A short and poetic piece that contemplates history and memory through the materiality of the moving image. It deals with politics, the suppleness of gesture, and the fleeting nature of our collective footing in tumultuous moments in time.”

The jury on Communicating Vessels said that “An incredibly intricate and layered work about being haunted by someone else’s story. A tribute to the efforts of a generation of pioneering women and the conceptual art they created. Also a meditation on motherhood, the responsibility of teaching and the fluid boundary between art and life. How does one imprint narratives and ideas on bodies and minds?”

The jury on Sun Dog said that, “The emerging young artist demonstrates a visionary approach to the tale of a young man adrift at the end of the world. A subjective piece that captures the acute delirium of tedious work and an environment that is harsh and unforgiving. The final, very uncanny image of two suns breaking through the clouds and rising in the distance is one of the more striking images of the Ammodo Tiger Short Competition.”

Ammodo, an organisation supporting art and science, became official partner of the competition in 2018. The three Ammodo Tiger Short Awards come with €5,000 each.

In addition to the Ammodo Tiger Short Awards, IFFR presents the Voices Short Award during the Awards Ceremony on Friday 31 January. The Voices Short Award, launched in 2018, is an audience award and celebrates the more narrative-driven short films in the festival’s Voices section.