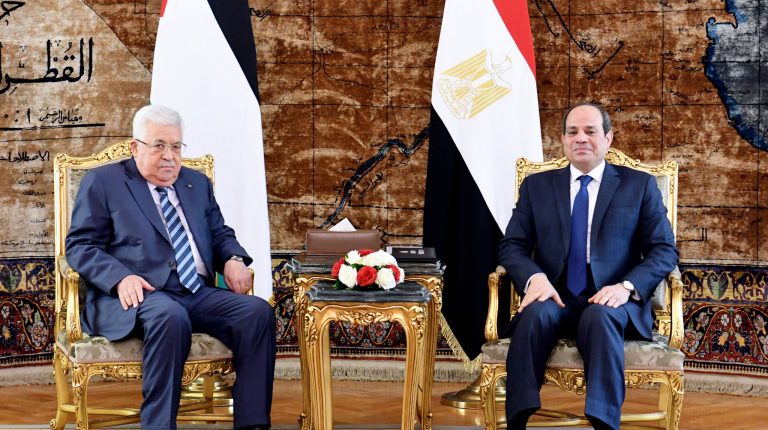 President Abdel Fattah Al-Sisi discussed with his Palestinian counterpart Mahmoud Abbas on Saturday the latest developments of the Palestinian issue, and recently-announced US peace process of the so-called “the deal of the century” in attendance of Head of General Intelligence Abbas Kamel.

The two presidents agreed during the meeting to continue intensive consultation and coordination regarding various aspects of the Palestinian issue, in a way that contributes to achieving the hopes of the Palestinian people, enabling them to build their independent state, and guarantee a better future for their future generations.

During the meeting, Al-Sisi stressed that “Egypt has been and remains at the forefront of countries seeking to achieve a comprehensive and just peace in the Middle East region, and it has adopted peaceful coexistence and renounced violence as a strategic approach to its policy for more than 40 years”.

He also said that Egypt devoted its efforts to spread that culture of peace in the region as the only way to achieve security, stability, development, prosperity for its people, and to change its reality for the better.

The president further affirmed Egypt’s stance towards resolving the Palestinian issue “through the establishment of an independent and sovereign state on the occupied Palestinian territories in accordance with international legitimacy and resolutions”.

“At the end, there is no alternative to direct negotiations between the parties to the conflict until a settlement can be agreed upon within a comprehensive framework that guarantees the continuity of that settlement, and ends the suffering of the Palestinian people,” said Al-Sisi

He also praised Egypt’s historic role in this regard and its stability and continuity in order to reach a just and comprehensive solution to the Palestinian issue and its unremitting efforts to push the path of Palestinian national reconciliation and build bridges of trust between the Palestinian parties to unite ranks at this delicate stage.

He explained that Egypt supports facing the challenges and undertaking the main entitlement represented in achieving the desired peace.

The Palestinian Authority is determined to move forward in steps to end the division in an effort to unite the Palestinian people, he concluded.

Last Tuesday, US President Donlad Trump proposed, what he described as, a “realistic two-state solution” to the Palestinian-Israeli conflict, requiring the establishment of a Palestinian state “that explicitly rejects terrorism” and makes Jerusalem “an indivisible capital of Israel.”

The plan stipulates a two-state solution, but recognises Jerusalem as Israel’s capital, gives parts of the West Bank to Israel, enforces the disarmament of the Hamas movement, the demilitarization of Gaza, and ends the right of return for Palestinian refugees.