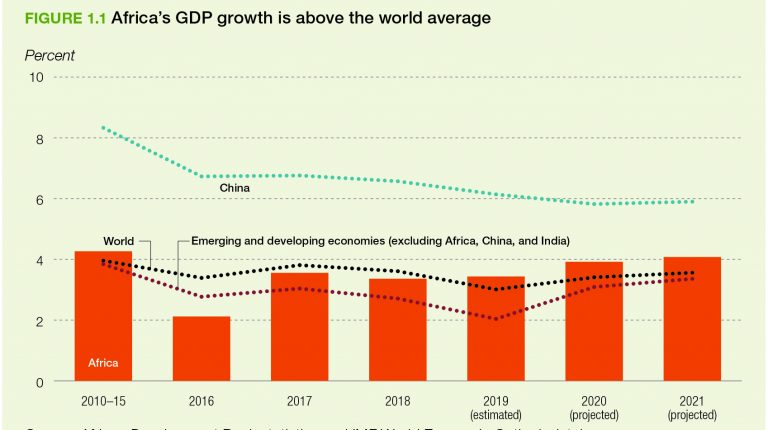 The five largest economies in Africa namely Algeria, Egypt, Morocco, Nigeria, and South Africa contributed more than half of the continent ’s growth in 2019, with Egypt contributing the most, accounting for about one-third of the aggregate growth rate of 3.4%, African Development Bank (AfDB) said over its African Economic Outlook 2020 (AEO) report on Thursday.

Egypt’s big contribution to the continent’s annual growth is due to the country’s bold implementation of its economic reform programme and the earlier than expected production from the Zohr gas field.

Economic growth in Africa 2019 is estimated at 3.4%, about the same as in 2018. Although stable, this rate is below the decadal average of 5% growth for the region, the report said.

The economies of Algeria, Egypt, Morocco, Nigeria, and South Africa jointly grew at an average rate of 3.1%, compared to the 4% average for the rest of the continent, the report said, noting that growth is forecasted to pick up to 3.9% in 2020 and 4.1% in 2021.

The relative contribution to Africa’s growth is skewed to a few regions. North Africa continues to be the largest contributor, accounting for 44% of Africa’s growth in 2019, due partly to Egypt’s large share in Africa’s economy and relatively robust growth.

Interestingly, Egypt’s real GDP growth was an estimated 5.3% in 2018, the highest rate in a decade. The growth was associated with a decrease in unemployment to around 10% from 12% in 2017, according to latest estimation of AfDB.

Stronger investment and net exports underpin recent growth in Africa. Since 2011, and particularly following the end of the commodity price supercycle in 2014, divergence has been widening between gross savings and total investments for resource exporters.

When countries are classified according to their resource intensity, non-resource-intensive countries have been widening gap in the continent’s average, and thus increasing current account deficits.

For oil exporters and other resource exporters, the savings-investment gaps have narrowed, leading to declining current account deficits.

Interestingly, fragile states have witnessed the fastest acceleration in investments, though they also have the lowest savings.

Decomposing Africa’s GDP growth shows that the shift from consumption toward investment and net exports observed in previous years has continued and strengthened.

In 2019, for the first time in a decade, investment expenditure explains

more of GDP growth than consumption expenditure. Growth in net exports has contributed more to aggregate growth than in previous years, rising from 1% in 2018 to 6% in 2019.

Similarly, the production and value-added approach shows that improvements in services are the primary driver, explaining more than 50% of growth in the region.

Risks to outlook skewed to downside

The outlook for growth in the short and medium terms remains moderate, said the report, adding that growth is forecasted to pick up mildly to 3.9% in 2020 and 4.1% in 2021.

This modest pickup is supported by demand-side components, especially a pickup in exports from the expected impact of the African Continental Free Trade Area, sustained public infrastructure investments, and strong private consumption.

On the supply side, it is supported by improvements in the quality of human capital, increases in the production of hydrocarbons in Egypt, Ghana, and Uganda, and increases expected in commodity prices, which are helping to improve the terms of trade for major commodity-intensive economies.

Domestic risks are particularly elevated. Extreme weather events particularly the type of devastating storms and floods that afflicted Southern Africa in the first half of 2019 and the expected return of El Niño conditions to East Africa could usher in severe droughts and suppress agricultural output and growth.

In countries holding elections in the next two years, there may be sociopolitical pressures to increase public spending, which would undermine plans for fiscal consolidation.

Risks associated with terrorism, armed conflict, insurgency, or social unrest in some countries may also weigh on economic activity, the report said.

On the external front, global economic activity is projected to slow in major economies, including China, the United States, Europe, and India, with strong trade and investment links with Africa.

The would hurt Africa’s growth through lower export demand and investment flows. Further escalation of trade tensions between the United States and China, which jointly account for more than half of global demand for metals, could reduce global trade volumes and hit metal-exporting economies including Ghana, Niger, and Zambia.

Faster-than-expected accommodation of monetary policy by advanced countries’ central banks could spur an inflow of “hot money” into Africa with associated macroprudential risks and disorderly exchange rate effects, especially in countries with liberalised, yet, underdeveloped financial and foreign exchange markets.

The average inflation rate for the continent inched down from 11.2% in 2018 to 9.2% in 2019, with notable variations across countries and economies.

Of 54 countries, 32 managed to rein in inflation in 2019 from 2017 levels, while 22 countries registered an increase in inflation, mentioned the report, noting that lower inflationary pressure is underpinned by stabilising energy prices and falling food prices driven by higher agricultural production.

Central banks reacted by adjusting interest rates to manage domestic demand. In countries with downward inflationary pressures, interest rates were reduced to encourage investment to spur growth as in Egypt, where interest rates declined by 150 basis points in August 2019.