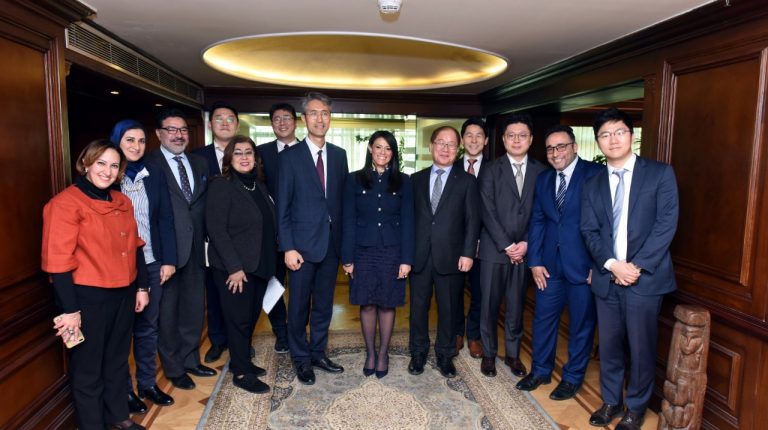 A high-level delegation from the Export–Import Bank of South Korea (Korea Eximbank) discussed with the Egyptian government funding new projects in the local market over their visit to Egypt from 27 to 30 January.

The delegation, which was headed by Hwan Joon Yang, executive director of Korea Eximbank, met with Minister of International Cooperation, Rania Al-Mashat to explore potential cooperation, said a ministerial statement on Saturday.

Both sides’ discussions focused on deepening joint cooperation upon the priorities of the Egyptian government, which were approved by Parliament and presented by Prime Minister Mostafa Madbouly.

Egypt is very keen on deepening its cooperation with South Korea, especially in terms of knowledge exchange, which has proven crucial in implementing the sustainable development goals (SDGs), Al-Mashat said.

For his part, Hwan asserted his Bank’s eagerness to support the Egyptian government in implementing its strategic goals over the next period, specifically SDGs.

Hwan and Al-Mashat reviewed the bank’s new projects that would be implemented in Egypt over the coming phase.

Eximbank is the largest South Korean corporation that introduces intelligence funds for development projects. The cooperation portfolio between South Korea and Egypt stands at about $458m, including projects to upgrade the transport sector in Egypt, most importantly the railway systems and Cairo metro project.

The Business delegation met President Abdel Fattah Al-Sisi over their visit where the South Korean business leaders clearly showed their keenness to work with their Egyptian partners, and to tap into Egypt’s potential by sharing a common strategy for their cooperation in key areas, the ambassador added.

The Korean delegation was deeply impressed by Al-Sisi’s strong leadership and vision to make Egypt a hub of trade and industry in the Middle East and Africa, encouraging them to work on the Egyptian investment file, the ambassador said.

In March 2016, Al-Sisi made a historic visit to South Korea, both sides adopted the Comprehensive Cooperative Partnership which serves as the platform for bilateral cooperation in many areas.

Trade exchange with South Korea remarkably increased by 52.5% year-over-year, reaching $2.160bn in 2018, compared to $1.416bn in 2017, according to the statistics of Egypt’s Trade and Industry Ministry.

The main Egyptian exports to South Korea include pharmaceuticals, fertilisers, carpets, marbles, cement, and chemicals, while key imports are automobiles, iron, and machinery.