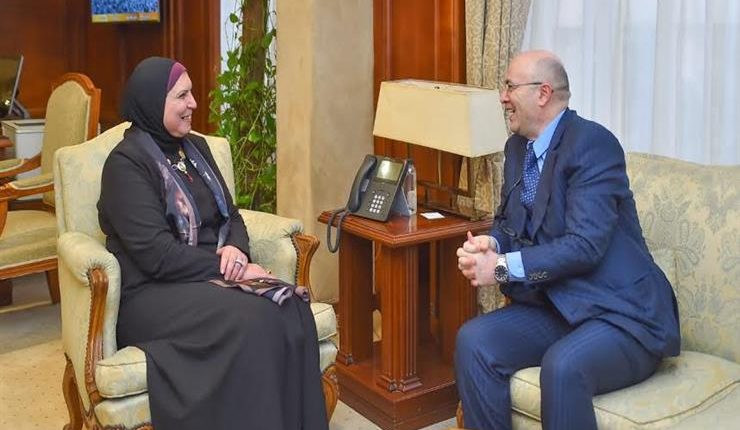 The trade exchange between Egypt and Morocco recorded $681m in 2019, according to Minister of Trade and Industry, Nevine Gamea.

She said that Egyptian exports to Morocco amounted to $540m, while the country’s imports from Morocco recorded $141 m.

Her remarks came during her meeting with the Moroccan ambassador in Cairo, Ahmed El-Tazi.

During the meeting they discussed ways to enhance joint economic cooperation between the two countries during the next stage, according to a press statement from the Ministry of Trade and Industry on Monday.

The Minister stressed the importance of activating joint work between Egypt and Morocco to achieve industrial integration between the two countries and also in order to export into EU markets, in addition to Arab and African markets.

Gamea said that there are great opportunities for joint investment cooperation, especially in light of the enormous potentials that the economies of both countries possess.

She also talked about the importance of strengthening cooperation between the two countries within the framework of the Agadir Agreement, in order to benefit from the accumulation of rules of origin for developing the industrial system in the four member countries, and to export globally.

The Agadir Agreement is a free trade agreement between Egypt, Jordan, Morocco, and Tunisia.

In response, the Moroccan ambassador in Cairo said that his country is keen to enhance joint economic cooperation with Egypt, especially in light of the depth of political and historical ties that link the two countries.

He added that there are great opportunities to make a qualitative shift in the level of joint economic relations by establishing industrial partnerships between the private sector on both sides, as well as joint cooperation in third markets such as the African markets, which provides promising investment opportunities for the Egyptian and Moroccan private sector.