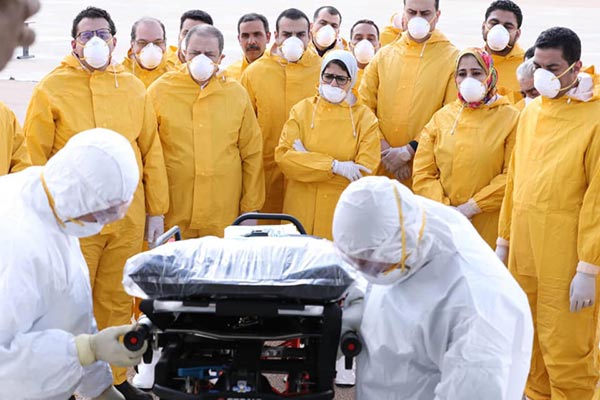 An Egyptian plane arrived on Monday evening at Al Alamain International Airport, coming from Chinese city of Wuhan, with 301 Egyptians  aboard, while China had prevented two who were suspected to have Coronavirus.

While evacuating the Egyptian citizens from China, two were suspected to be infected with Coronavirus, as they were suffering from high fever, therefore the authorities there banned them from traveling, said Egypt’s Minister of Civil Aviation Mohammad Manar.

Although the plane carrying Egyptians from China arrived with the number of Egyptians aboard, the Egyptian authorities announced on Sunday that the plane is to bring 306 people back. While Manar officially announced that two people were prevented to travel, the officials did not give any further information about the three other passengers.

Earlier, Minister of Health Hala Zayed went in an inspection visit at Al Alamein Airport which received the plane in order to see the preventive measures taken in the airport.

Zayed attended a simulation plan in the airport preparing to receive the passengers, including all preventive measures used by everyone assigned to deal with the plane passenger including the plan crew and the police officers in the airport.

She also asserted that the people who deal with the passengers are taking preventive measures in accordance with the World Health Organisation (WHO) guidelines, adding that the evacuation hospital is provided with all medical specialties, including “obstetrics and gynaecology,” as one of the plane passengers is in the last month of pregnancy.

The outbreak of Coronavirus had already killed 361 people in China, while more than 17,000 infections were confirmed on Monday. Outside the virus’s home of origin in China, there are more than 150 confirmed cases of the virus and one death in the Philippines.