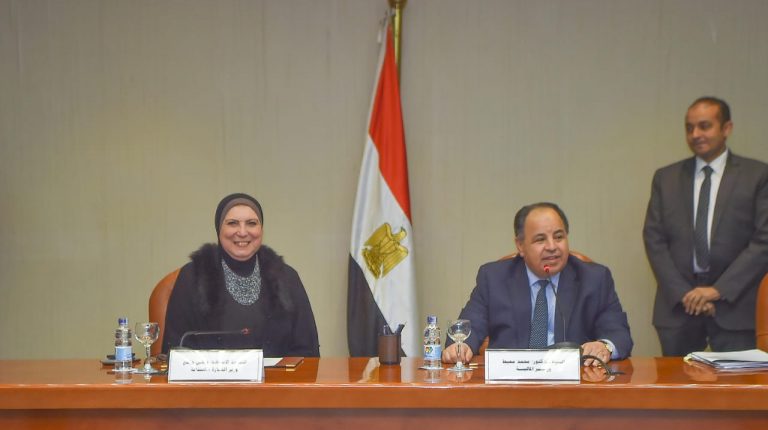 Minister of Finance Mohamed Maait, and Minister of Trade and Industry Nevine Gamea signed with representatives of 31 local and foreign exporting companies to discuss settlement agreements for exporters’ late dues with the Export Development Fund. The fund is part of an initiative approved by the government for companies that have expansion plans to increase their investments and industrial production.

The initiative calls for the government to settle the late dues of exporting companies with the Export Development Fund within 5 years, provided that the companies commit to directing investments, establishing new production units, expanding production lines, and increasing capacity.

Maait emphasised that political leadership pays great interest to support industry, maximise productive capabilities, and expand export base, and that there are presidential directives to quickly respond to the late export dues of exporters.

He added that the Ministry of Finance is committed to paying the late export dues of exporters as stipulated in the settlement agreements that was conducted with exporting companies.

The minister stressed the importance of periodically considering an export subsidy programme to ensure the achievement of national interest.

Gamea said that the Export Development Fund’s total disbursed dues was EGP 291m as of December 2019 for 12 companies.

She pointed out that during the coming period, export councils will be reconfigured to achieve the government’s vision to boost exports and open more foreign markets for Egyptian exports in addition to supporting exporters and increasing their competitiveness in various foreign markets.

The minister further noted that the export subsidy programme would be reviewed periodically to measure the extent of its feasibility in achieving the interest of both exporters and government, taking into account the changes taking place in the global economy.

The current exports subsidy system was developed in coordination with export councils and exporters, Gamea said, affirming the importance of testing the efficiency and effectiveness of the programme, which was launched late November.

Egypt signs agreement with ITFC to fund commodities imports worth $1.1bn in 2020