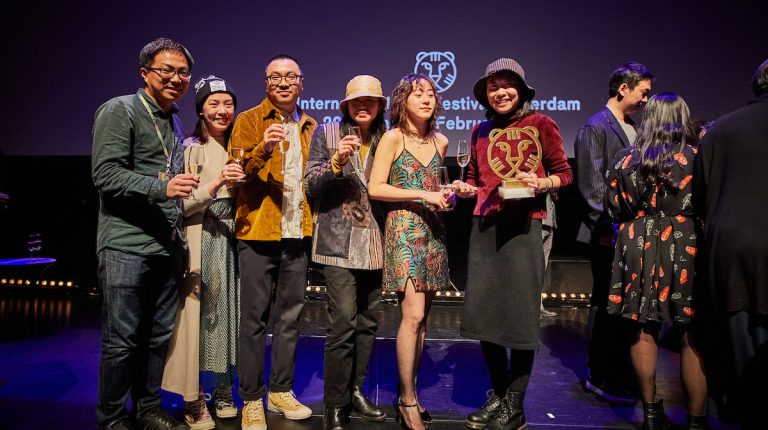 Moving On by Yoon Dan-bi won the Bright Future Award for best feature-film debut. The Bright Future Competition jury gave a special mention to Isabella Rinaldi, Cristina Hanes, and Arya Rothe for their film A Rifle and a Bag.

Festival Bero Beyer congratulated all winners and said: “We are incredibly impressed with the quality of this year’s Tiger Competition, which in many cases spurred significant festival buzz. We thank all filmmakers for their ambitious and creative approaches to cinema. Remember these names, because we’re sure to see much more of them in the future.”

The FIPRESCI Award from the international film critics went to Only You Alone by Zhou Zhou. The KNF Award, presented by the Circle of Dutch Film Journalists, went to Kala azar by Janis Rafa (also in the Tiger Competition).

The Tiger Competition-selected film Nasir by Arun Karthick won the NETPAC Award for best Asian film premiering at the festival. The winner of the IFFR Youth Jury Award is Les misérables by Ladj Ly. Laurence Attali won the Voices Short Award for his short film Tabaski, while My Mexican Bretzel by Nuria Giménez won the Found Footage Award.

The Tiger Award is IFFR’s most prestigious award and includes a prize of €40,000 to be divided between filmmaker and producer. The Tiger jury also chooses an outstanding artistic achievement within the Tiger competition to receive a Special Jury Award worth €10,000.

The jury selected The Cloud in Her Room by Zheng Lu Xinyuan saying that “The jury was unanimously impressed by the innovative personal language, which coherently succeeds through various approaches and forms in conveying subjectivity and duality, and in exploring the fantasy of cinema. In a precisely framed urban landscape, it gracefully portrays a certain global generation paralysed by modern alienation and capitalism.”

The jury also gave the Special Jury Award to Beasts Clawing at Straws by Kim Yonghoon saying that that wanted to “acknowledge a strong first film which is resolutely inscribed in an existing genre but demonstrates undeniable craftsmanship – from the screenplay to the performance to the temporal flexibility of structure – and engages with the current disparity of class.” The jury included Hany Abu-Assad, Emilie Bujès, Kogonada, Sacha Polak, and Hafiz Rancajale.

The winner of the VPRO Big Screen Award is chosen by an audience jury of five film fanatics. The film wins a guaranteed release in Dutch theatres and will be broadcast on Dutch public television channel NPO 2. Of the €30,000 in prize money, €15,000 is spent on the winning film’s theatrical release and €15,000 goes towards the production of the filmmaker’s next project.

The winning film was A Perfectly Normal Family by Malou Reymann. The jury report described the film as “A truly moving film that goes beyond the sensitive subject of gender reassignment. The film shows family struggles that are relatable to anyone. At the heart of the film is the amazing lead performance by 11-year-old Kaya Toft Loholt.”

The jury said that the film shows that “the unconditional love between father and daughter is challenged by her father’s transitioning, but the film closely captures, in intimate detail, all the different phases the young girl has to go through. The film gives rise to many emotions and considerations. It surely deserves to be experienced by a wider audience.”

The Bright Future Competition comprises a selection of fifteen debut feature-length films from all over the world, presented at IFFR as a world or international premiere, as part of the Bright Future programme. The award is accompanied by a €10,000 prize, and was given to Moving On by Yoon Dan-bi.

The jury report in the film said: “Three generations of the same family gather at very different crossroads in their lives. They are challenged to recreate their family ties in the presence of imminent death, broken hearts and financial instability. When the threshold arrives, everyone is pushed to grow, individually and as a family.”

They added that the filmmaker accomplishes a precise and powerful script, embodied by a fantastic cast, with a refined sense for rhythm and detail. “She creates a thoughtful portrait, that goes straight to the heart of human relations and emotions, and thus enriches the cinematic tradition of family drama remarkably. This is a bright future for a great talent, indeed!” the report said.

The jury also gave a special mention to A Rifle and a Bag by Isabella Rinaldi, Cristina Hanes and Arya Rothe. On choosing the film, the jury said “we want to recognise this triple co-directing effort. The creators achieved a masterfully crafted documentary, with humble, curious, and frank determination.”

“The existence of this young couple of ex-Naxalite guerrillas is determined by the Indian caste system. They sacrifice their political ideals for property and education rights in hopes of a better life for their two young children. How to keep dignity and tenderness in a situation like this?” The jury said that “While we bear witness to these lives, many daily and existential questions arise and give cinematographic form to the potent human energy that this family shares, creating a complex and intimate portrait of a marginalised family. We hope to keep encountering such collective sensitivity in the future.”

Using tear-to-vote cards, visitors rate the films after the screening. The film with the highest rating at the end of the festival wins the BankGiro Loterij Audience Award worth €10,000. The black and white version of Bong Joon Ho’s film Parasite took the award. As for the Voices Short Award, it is given for narrative-driven short films from the festival’s Voices section. IFFR 2020 screened five different Voices Short compilations, totalling 19 films. The audience chose the winner (prize money €2,500) using voting cards. The award was given to Tabaski by Laurence Attali.

The International Federation of Film Critics (FIPRESCI) Award is awarded to the best feature film out of all world premieres in Bright Future (excluding the Tiger Competition).

This year it was given to Only You Alone by Zhou Zhou. Talking about the film, the jury said it brings a touching story about loneliness and daring to be different in modern Chinese society.”

“It is a portrait of a young woman, brilliantly played by Chi Ying, who tries to find her way in an unsympathetic and intolerant world.”

The NETPAC Award is awarded to the best Asian feature film world premiering at IFFR 2020 by a jury from the Network for the Promotion of Asian Cinema. The winning film was Nasir by Arun Karthick.

The film is frightfully universal story of an everyday protagonist who undergoes a fate that can happen to any of us, and whose love for his family, poetry, and his country, in this case India, is depicted with incredible restraint and a patient accretion of visual and aural details. Borrowing freely from classical fiction cinema and observational-documentary techniques, this moving letter to and from the oppressed Muslim minority in Mother India is eerily prescient of the ongoing rise of Hindu nationalism in India today. May Nasir rise again.

The KNF Award is given to the best Dutch, or Dutch co-produced, feature film at IFFR. The winner is selected by a jury of the Circle of Dutch Film Journalists. This year it went to Kala azar by Janis Rafa.

The film handed the audience the key to understanding the main themes running throughout the competition. Like most of the films in the selection, it is about imbalance, conflict, and worlds in a state of decay. It is a requiem of humans for animals, and maybe even a requiem of animals for humanity. It reveals a story in a way that only the visual language of film can master.

One of the best scenes in the festival included a haunting image of a chicken barn, the bathing of a dog, and a moving scene about roller skating. The film creates its own surreal universe, which allows the filmmaker to comment subtly on the sickness of the world and the ecological collapse we are all facing.